The 39th edition of the ANATO tourism fair takes place in the capital at the moment, promising to further promote Colombia on a world stage.

There’s no doubt that tourism is flourishing in Colombia, and according to the latest numbers from the trade ministry, tourism continued to rise in 2019. Last year, 3.4 million foreign visitors entered Colombia between January and October.

This reflects a 2.7% increase on 2018, and comes in spite of travel warnings issued by several international foreign offices following the protests that rocked the country at the end of the year.

And Colombia continues to be the darling of international media. In January it ranked third in the Financial Times fDi Magazine’s ‘Cities of the Future’ list.

All of which means that this year’s ANATO tourism fair should be off to a good start. Until 28, the Colombian Association of Travel and Tourism Agencies, ANATO, will welcome national and international guests to Bogotá’s conference centre Corferias for the 39th time.

This year’s event features representatives from all 32 Colombian departments and 36 other countries, all vying for the best opportunities for trade with both local tourism operators and guides, and larger international tour operators.

The fair – one of the most important of its kind in Latin America – will welcome more than 3,500 exhibitors and expects up to 40,000 participants during the three-day event. All sectors of the tourism industry will be represented – from airlines, over lodging establishments to those offering medical travel assistance.

With two guest destinations, one international and one national, there will be a special spotlight on Peru, while Villavicencio carries the flag for Colombia.

“There are various options we can offer national and international tourists in terms of destinations, segments, products and services,” said Paula Cortés Calle, executive president of ANATO. She continued that the ANATO fair provided a competitive commercial space, “which allows all suppliers to present new experiences to travellers.”

In terms of the ongoing tourism boom, exhibitors will have plenty of good arguments to convince tourists that Colombia should be their next travel destination.

And it’s not likely that this boom will come to an end in near future. In 2020, the country expects 4.9 million visitors – both foreign and non-resident Colombian. This would be another peak in fast-growing development of the country’s tourism. 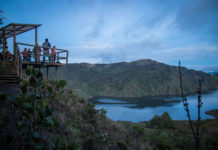