We speak to Adriana Santacruz, one of the first designers to integrate indigenous traditions into her fashion designs.

On a semi-sunny day, I ventured into Rosales to interview the renowned designer Adriana Santacruz. We met in her boutique, nestled between chic high-rise condos and overpriced pet stores, along with her son, Juan Santacruz whose Perdido watering hole is downstairs.

Santacruz pioneered the use of traditional weaving techniques in contemporary fashion, beginning back in 1999. While she hasn’t participated in a live show since before the pandemic, her passion and eye for style remain undiminished. Juan explains that they now concentrate on B2B orders.

In addition to Bogotá and her native Pasto, Santacruz sells her work as far afield as Portugal, Kuwait, and Bahrain. It’s also available from Donna Karan’s pricey, upscale Urban Zen boutiques in the United States where pieces can sell for upwards of a thousand U.S. dollars.

Before we start the interview, she gives me a tour of the current collection. It includes ruanas, jackets, coats, mantos (capes), and skirts which stood out on rollaway garment racks on wheels. Plus, there were leather bags made in partnership with the French-Colombian luxury brand Atelier Artisanal that even Sex and The City’s Carrie Bradshaw would die to own.

The collection consisted primarily of dark hues and earth tones, which Santacruz said were the inspiration for this season’s collection. This is the opposite of the patina for the prior season, namely blues, greys and whites. Most of the pieces are wool or a cotton wool blend and even incorporate PET or recycled plastic which have been turned into thread. The current collection ranges in price from COP$1.2 million to COP$3 million.

When we finally began our conversation, Santacruz was in a buoyant mood. The sun had made its appearance and I had ordered a chilled glass of white wine to get those creative juices flowing.

Santacruz told me that grey and blue were harmonic colours, the right colours to begin this season’s collection. She sees red as the colour that symbolises the life she wanted to bring in. The lion’s share of the pieces are structured/unstructured shapes. For instance, in her hands, a ruana will not resemble what we think of as your typical ruana but becomes a timeless, elegant piece. Santacruz describes this as “complejo simplicidad,” complex simplicity.

Another of Santacruz’s claims to fame is that she was one of the first designers in Colombia to integrate the weaving techniques of indigenous communities in her work. Santacruz wanted to assimilate these woven fabrics into contemporary fashion at a time when most other designers were loath to do so – nor were customers likely to purchase them. Now it has become what she calls the DNA of the brand.

Related story: “When we sit down at a sewing machine, we’re all the same” – Maria Luisa Ortiz

Santacruz began her collaboration with the los Pastos community more than twenty years ago. Los Pastos are an indigenous community from southern Colombia, where Santacruz and her family hail from. At that point the idea of using these woven design techniques which are passed down from generation to generation was unusual. But Santacruz used it as the basis for her university graduate thesis and then went on to launch the brand.

Now supporting indigenous communities and their cultures is all the rage and sampling their work in fashion has become the norm. Her designs, her son tells me as we wrap up our conversation, are waterproof because of the tightly woven design technique which is done on looms. Most importantly, the ancestral legacy mentioned on their website is alive and well at the House of Adriana Santacruz.

To find Adriana Santacruz’s work in her native Pasto: 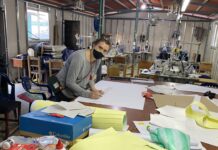 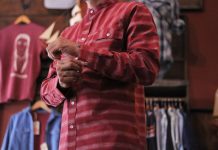 Made in Medellín: local brands in Colombia’s fashion capital face an uncertain future