Still thinking of a New Year’s resolution? How about finally making it out to one of Colombia’s amazing festivals for 2018?

Colombians are known for their love of a good time, which explains the abundance of festivals this country has to offer. From tiny towns celebrating a foodstuff that is the backbone of their economies, to giant festivals that attract talent from the world over, there’s something for any taste. To help you mark your calendar for 2018, here are some of the most popular annual festivals from around the country.

Make plans to attend next year’s edition of Colombia’s second biggest carnival and take part in the incredibly colourful parades. Just don’t wear your best clothes as it gets messy when the talcum powder and party foam starts flying!

You just missed the 2018 edition of Manizales’s biggest fair so mark your calendar for next year and don’t miss out on lots of music, parades and beauty pageants.

This festival cements Valledupar’s position as the cradle of vallenato music and has been going strong for over 50 years.

The ocean is central to life of the coast so it’s only natural to celebrate it. For a few days at the end of July, Santa Marta gets wild with parades, local music and food, along with the requisite reinado.

To celebrate its famous flower industry, paisas host a ten-day-long party. The many events aren’t to be missed but the most important is the flower parade where hundreds of people carry large displays covered in flowers (silletas) through the city’s streets.

A festival to celebrate…wind? Every year in August (the windiest month), villaleyvanos and tourists alike take their colourful and creative kites to the sky.

Cali may be known as the world’s salsa capital but it’s also host to Colombia’s largest festival of Pacific music. Not to be missed.

National and international jazz will fill the plazas, parks and churches of this picturesque town nestled on the Magdalena river

Valle del Cauca’s capital city is one of the world’s salsa capitals so practise your best moves for this massive festival dedicated to all things salsa.

Boyacá’s picturesque pueblitos are renowned for their Christmas lights but the department’s most famous town takes it to the next level. 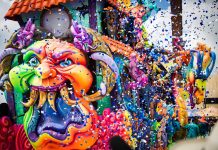