The Liga Águila finished the regular season with the top eight qualifying for the playoffs. With the draw for the quarterfinals done, the champion will be decided in straight two-legged knockout between the top teams. See below for details of the draw.

Ahead of the final round, Colombia’s international top team Atlético Nacional had already qualified. The fact that the holders of the Copa Libertadores fielded a reserve line up for the majority of the season – la selección striker Miguel Borja started in only three out of the twenty league games – didn’t stop los verdolagas from comfortably qualifying in first place. However, in spite of their dominance they are not the big title favourite. This is because at the beginning of December Nacional are heading to Japan for the FIFA Club World Cup and will leave the final stages of the domestic league for the youth team.

Independiente Medellín, the second side from Medellín, were the other team that qualified ahead of the final round. The reigning champions are again one of the favourites for the league title but a defeat in the last game brought them down to fifth place. Elsewhere, rookie manager and national team legend Mario Yepes struggled for the majority of the season with Deportivo Cali, but with four victories in the last four games, los azucareros reached the playoffs on a high in second place.

Deportes Tolima saw a steady season finish in third place and – due to a last round victory versus Jaguares – el vinotinto y oro qualified as one of the top four teams, meaning they will finish their quarterfinals in their own stadium.

Independiente Santa Fe had a busy schedule at the start of the season. As Copa Sudamericana holders they had many international games, including the intercontinental Suruga Bank Cup in Japan, which meant their league performance took a hit. Santa Fe struggled until the final round to qualify for the playoffs until a victory in Manizales over Once Caldas in the final fixture secured their playoff spot.

Millonarios had an irregular season, they fired manager Rubén Israel halfway through and brought in Diego Cocca. Under the new manager, Millonarios created a very attacking style that resulted in many spectacular games with lots of goals and their qualification for the playoffs in the newly relaid pitch at El Campín stadium in Bogotá.

The surprises in the top eight are Atlético Bucaramanga and Patriotas Boyacá. Bucaramanga, promoted from the second devision at the start of this year, had a steady season under successful manager Flabio Torres. With little flair but a strong defensive line, los leopardos entered the top eight in round five and never left. It is the first time since 2004 that Bucaramanga have qualified for the season final.

For Patriotas Boyacá, it is the first time they have reached the end of the season spectacle. The club from Tunja had come close to qualification many times since their first appearance at the highest level in 2012, but in their tenth season a victory over city rival Boyacá Chicó – now relegated to the second division – finally secured them a place in the quarterfinals.

The dates for the final round are as follows, but if Atlético Nacional qualifies for the Copa Sudamericana final, it could be modified. 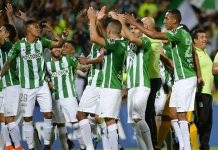