Bogotá through the 5 senses was one of several English-language books to be published at the end of last year, along with a new anthology of women writing about solo travel in Latin America and a collection of short stories set in the captial. 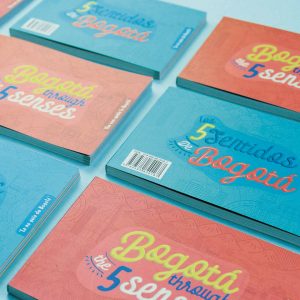 Bogotá through the 5 senses is a quirky pocket-sized book that calls itself ‘The non-guide to Bogotá’ and aims to be more of a companion as you explore the city’s different zones. Each section contains an introduction to the area (including its DNA), a guided walk and advice from both a bogotana and a foreigner. There’s also a map and a place to make some notes, giving it the feel of an activity book.

This, the first in the series, looks at La Candelaria, Teusaquillo, Commercial Chapinero, Chapinero Gomelo, Quinta Camacho and Usaquén. It’s been produced in both Spanish and English, with the English at the front or the back depending on which way round you read the book. It’s short enough to be easily absorbed and manages to capture slices of this ever-changing city in an innovative way, especially for those who are unfamiliar with the capital.

While the book is easily digestible, the sheer quantity of the food they recommend on each walking tour is less so, unless you want it to become more of a waddling tour – we counted five places to eat or drink during the three-hour Candelaria walk and six in the area around Lourdes. The authors have certainly taken the sense of taste seriously with some excellent descriptions of local snacks and delicacies.

The text paints a more honest portrait of Bogotá than other guides we’ve seen – in fact, it actively revels in the many faces of the city that are juxtaposed upon one another, highlighting luxury apartments located near red-light districts. While the book is probably more useful to newcomers, there were some interesting facts that may surprise longer-term residents – for example, I never knew that Quinta Camacho used to be a farm belonging to Enrique Camacho. But maybe I’m showing my ignorance.

The maps of each area are visually compelling, so much so that I’d love one that covered the whole city for my bedroom wall. However, while I can see why the authors didn’t want to put words on that wonderful artwork, it would probably help to mark some of the landmarks – or indeed the walking route.

By Emily Hastings. This article first appeared in printed Edition 49 of The Bogotá Post.