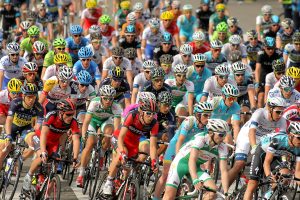 Victory for Simon Yates in Madrid looks highly probable after another strong display at the Vuelta a España in stage 19.

The stage was won by Thibaut Pinot of team Groupama-FDG and it was the Frenchman’s second stage win after winning at the iconic Lakes of Covadonga last Sunday. Pinot said before the race that “it’s up to me to make the most of this”; an attitude he acted on as he took out the stage in three hours and 42 minutes, a mere five seconds in front of the general classification leader Simon Yates.

Yates’ lead is now imperial and he’s likely to win his first title in Madrid on Sunday. Second-place Alejandro Valverde is a minute, 38 seconds behind him as the Englishman also benefited from a six-second time bonus.

It was an impressive stage for the Colombians as well as Rigoberto Urán took out fourth place and Miguel Ángel Lopez was closely behind him at fifth. Lopez is now fifth overall and is two and a half minutes behind the leader.

Nairo Quintana of Movistar, who has stumbled the most over the last two days, finished tenth for the day and is just behind Lopez at sixth overall. Stage 17 was the turning point for Quintana as he lost 55 seconds and slid to sixth place. The native of Boyacá has now said that his aim will be to support his teammate Alejandro Valverde to try and beat Yates as the race enters its final weekend.

Quintana had nearly achieved this feat in the early stages as he dominated the flat roads but Yates took the initiative in the final 10 km stretch. The Vuelta’s 19th stage is characterised by its climactic uphill climb towards the finish that ascends the Coll de la Rabassa in Andorra.

The race now moves towards Coll de la Gallina; a short, steep ascent that climbs 4000m in altitude and covers 105km in total. Given his current lead, however, come Saturday evening it may be Yate’s hold on the Vuelta that is insurmountable.