Fifteen women, most of them donning neon pink and green paint in lieu of shirts, stood in a row in the main courtyard of the Externado University on Thursday afternoon to read aloud emotional and graphic testimonies of sexual harassment, rape, domestic violence, stalking and childhood abuse. The students read stories submitted by anonymous female classmates, often choking up while reading and moving some women in the audience to tears.

The demonstration was organised by feminist collective Destapa la Olla as part of an effort to call attention to rape and sexual harassment on campus, and what the members see as the university’s insufficient response to address it.

Paula Valentina Castro, more commonly known by the moniker Val Riot, says that many of the cases of “sexual aggression” are perpetrated by fellow students, professors and administrators.

The existing protocol for sexual harassment and assault, said Castro, doesn’t provide enough support to victims and often retraumatises them in the process. One of the anonymous testimonies read aloud described this experience.

“I’m fed up with having to see my classmates suffer for having to share spaces with a rapist. I’m fed up that they can’t walk calmly through the campus or even just enter a classroom. I’m fed up that they never believe us, that we are the ones who are persecuted while the rapists walk free. I’m tired of my friends blaming themselves for having been raped. I can’t stand knowing that those men that have destroyed lives walk calmly through the university. I’m sick of people that believe them and give them second chances without having to recognise what they did. One day they will fall.”

Members of Destapa la Olla said that the culture of entitlement to women’s bodies often extends to the classroom, where female students receive sexually inappropriate comments from their professors.

“They think they have the right to comment on our bodies, about what we’re wearing, about how we’re dressed,” said Castro. “Obviously the girls report them but nothing ever happens.”

In addition, she said the administration doesn’t follow up on cases, resulting in victims sharing classes with their rapists and perpetrators.

“They continue to teach here, they continue to inhabit the same spaces as their victims,” she said. “So we got tired of staying silent because we feel that silence is permissive and silence is complicit with the aggressors.”

Thursday’s demonstration was a continuation of protests organized by Destapa la Olla and other collectives at various universities. A year ago, the group staged a similar event at the University of the Andes that eventually resulted in a professor stepping down from his position last month after six of the testimonies accused him of sexual assault, intimidation and abuse of power. Last year, National University dismissed a professor accused of sexual assault by three students.

Participants on Thursday said that the culture of silence is what motivated them to take part in the event, in order to make the numerous cases of sexual assault more visible. “I think a lot of girls are left without the power to say anything out of fear or because they don’t feel acompañadas,” said one of those participants, Laura Linarez. “So I decided to be part of this because I feel it’s a voice to tell them ‘Hey, we’re with you if you need anything, we’re going to listen to you and support you in any way that we can.’”

Another demonstrator, Hada Quimbayo, said that she also hopes the event will put pressure on the university to implement a stronger protocol for dealing with cases of sexual violence and harassment. “It’s a way to give a voice to these testimonies and also take away the fear that they won’t be believed,” said Quimbayo. “But I also think it’s very powerful for the institution because it’s like — Hey this is happening, what are you going to do about it? What measures are you taking?”

As for the unusual choice of attire, Castro said the decision was simply a method of drawing onlookers to their cause. “We know that in this country it is not normalized for girls to walk around with their chest exposed so we knew it was a fija strategy to get attention and to make people want to sit here listening to us.” 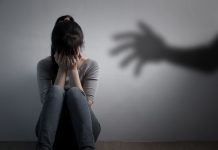