Ovidio González, the father of renowned Colombian Matador cartoonist Julio César González, was suffering from a painful mouth cancer, and passed away peacefully in his home town of Pereira on July 3.

In an interview with El Tiempo, González said: “It is unfortunate that this first case had to go through so much formality, it is double the pain for my family, which now has ended. Hopefully this will be of some use.”

The right to die – now legal in Colombia after heated debate in Congress and last-ditch attempts to stop it – had been denied to González, but the family filed a lawsuit, and last Wednesday, judges ruled in the family’s favour.

“I agree with the decision of my father [to end his life],” the cartoonist González said. “He had been crying in pain that he wanted to end it, and that must be respected.” 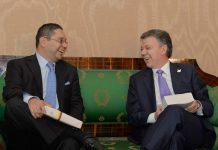 The International Criminal Court: Bringing justice to the world