The department of Vichada has faced catastrophic floods since July and local authorities are struggling to contain the calamity stemming from rising water levels in rivers across the region. Local reports in Vichada have claimed that up to 12,000 people have been left homeless as a result of the floods and a red alert has been issued in response.

As of August 6 the water levels are now at an alarming 16.32m above the normal level,  an increase of over 2m over last winter. The department’s capital is Puerto Carreño which lies on the border with Venezuela and the city has seen incalculable loss to its central district and areas of commerce.

Speaking to El Tiempo, Vichada’s Governor Luis Carlos Alvarez sounded the distress call to the national government to step in and step up with assistance for flood victims. “I’m worried that the water level keeps going up and it inundates the airstrip because this is the only means of rapid communication that we have in the department.” Carlos Alvarez said of the dire transport situation within the region, including major arterial roads that connect the isolated department with the rest of the country. Schools across the department have also been affected with many children unable to attend classes as a result of the flooding.

The Colombian disaster management authority confirmed that around 2500 care packages of food as well as 300 tents have been provided though it would be adequate to cover the 12,000 affected by the disaster.

Unfortunately for the people along the rivers Orinoco, Meta, Casanare and Arauca among others, IDEAM (El Instituto de Hidrología, Meteorología y Estudios Ambientales) have warned  that the rains won’t let up until August 15 and that the red alert may be in place until the end of the month, by which point the communities begin the difficult task of rebuilding from the devastation.

In the absence of adequate supplies, the department of Vichada is asking for people to donate non-perishable goods, tents, blankets and mats.

The municipality of Vichada can be contacted here for further information on how best to help. 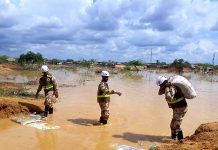 Tens of thousands affected by floods in La Guajira 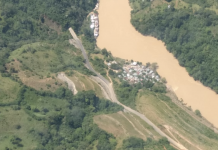 State of emergency due to floods in Cauca department