Home Colombia Colombia and the IMF

In recent weeks, the Greek foreign debt crisis has dominated world news and raised questions about national debt, austerity and the role of the International Monetary Fund (IMF). These are familiar topics for a number of Latin American countries, many of which had borrowed heavily in the 1960s and 1970s until growth slowed and their debts became bigger than their earnings. The Argentine financial crisis of 2001 is perhaps the most famous example.

What is the IMF?

The IMF was born out of the Bretton-Woods Agreement in July 1944. While World War II was still being fought, delegates from 44 Allied countries met to build a framework for economic co-operation that would give stability to the international money markets.

While many of their policies cause debate, the most heated controversy comes from the conditions the IMF imposes on countries in order to receive loans.
A vocal critic, liberal economist and Nobel Peace Prize Laureate Joseph Stiglitz contends that the fiscal reforms demanded in exchange for IMF loans cripple the economies in question.
Back in 2012, he called the EU austerity measures a “suicide pact”. He said, “austerity leads to the collapse of the economy, the answer over and over is more austerity”.
The IMF argues that their interventions have seen some successes, and that the very fact that they are dealing with economic crisis means that difficulties and ‘painful readjustment’ are unavoidable. They also point out that countries are not obliged to take out IMF loans.

In an interview with Euronews last month, Ecuadorian President Rafael Correa said, “We Latinos, we are experts in crisis. We have lived through all of them and we look at Europe with a sense of worry because in Europe you are making the same mistakes as we did.”

Referring to Greece, he added, “Let’s talk about all the conditions the country is submitted to – IMF packages – we Latinos we’ve been there. All those measures are not meant to overcome the crisis, they are just to liquidate the debt.”

Dealings between Colombia and the IMF are perhaps less well-known. While never being among the wealthiest nations of Latin America, it has long been one of the most economically stable.

Colombia avoided IMF intervention until 1999 when a massive economic crash forced the nation to take a large bailout, with even larger sums being borrowed in the years since. This has brought about drastic changes to the country’s financial policy, provoked enormous resistance from trade unions and continues to shape the country’s politics to this day.

Often referred to as the ‘lost decade’ for many countries in the region, the 1980s saw a the deepening of the foreign debt crisis in Latin America, partly due to increased borrowing during the 1970s oil crisis, and 16 countries defaulted on their loans.

Colombia was the exception, enjoying steady economic growth and always able to service its foreign debt, although the country’s economic policy still faced a lot of criticism. As a highly protectionist nation – sometimes dubbed ‘The Tibet of Latin America’ because of its relative isolation – Colombia employed extremely high tariffs and many economists and business leaders felt that it needed to open up to more free trade.

President César Gaviria was elected in 1990, after a bloody electoral campaign in which four presidential candidates were assassinated. It was a time of political reform, with the creation of a Constituent Assembly which drafted a new constitution for the country. The constitution of 1991 aimed to “strengthen the unity of the Nation, and ensure its people life, community, work, justice, equality, knowledge, liberty, and peace within a democratic and participatory juridical framework that guarantees a politically, economically and socially just order.”

It was also the start of drastic trade reforms in the country, liberalising Colombia’s financial system, investment, foreign exchange and tax regimes. During the early years of reform the economy boomed, with annual growth of about six percent and Colombia managed to curb inflation, but these figures were deceiving. Wage inequality gradually increased during this period, and the lowest-income households were particularly hard hit. The large informal sector of the Colombian economy grew even further as some workers in tradition- ally protected industries found themselves out of a job.

Moreover, the economic boom was not sustainable. As Ignacio Lozano from the Department of Economics Research at the Banco de la República writes, the new constitution forced the central government to transfer an increasing share of its current revenue to Colombia’s departmental governments. Lozano noted that government spending also increased in a number of other areas. In 1990, obligatory spending rose to 63.9 percent of the government’s current revenues. By 2000 it was well beyond 100 percent.

Such government spending was dependent on high tax revenues and would be in trouble if revenue didn’t keep up, which is what took place later in the decade, causing government debt to almost double from 24.9 percent of GDP in 1995 to 46.2 percent in 2000.

And it wasn’t only public debt that was on the way up – private debt was rising too.

Liberalisation of the financial sector resulted in an unprecedented credit boom with loans and mortgages given more freely than ever before. In hindsight, many of these loans were not secure. Combined with a worsening security situation, Colombia was no longer such a stable economic proposition.

Most damaging to the average Colombian are the severe cutbacks in public investment in basic social services: healthcare, education and social security 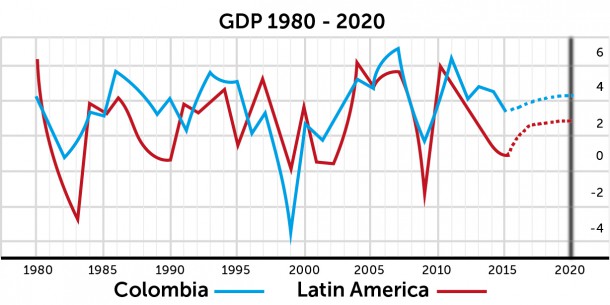 The economic turmoil which hit Colombia in the late 1990s was not unique to the country; many developing or recently developed economies entered a recession during this period. Colombia proved to be one of the most vulnerable, however, and the economy rapidly deteriorated from 1998 onwards due to a number of factors, including a fall in commodity prices.

The disastrous shockwaves were magnified by ever increasing guerilla violence and corruption, plus a devastating earthquake in the coffee region. Unemployment soared to 20 percent. Huge numbers of loans were not being repaid and banks repossessed many homes. When interviewed by The Bogota Post, a former bank employee recalled how many of these properties were sabotaged by the former owners with anything of value stripped and taken away, including the sinks and toilets.

The banks, heading towards collapse, were bailed out by the government. But the government was increasingly unable to fund the running of the country.

On September 26, 1999, the country agreed to a USD$2.7 billion loan from the IMF. The government engaged in a series of controlled devaluations of the peso and then let it float freely against the dollar. By December, its value had decreased by 20 percent. In a story that has now become very familiar, the IMF loan was subject to commitments to numerous austerity measures such as a decrease in public spending and increased privatisation.

In 2002, the Committee for the Abolition of Third World Debt stated: “Most damaging to the average Colombian are the severe cutbacks in public investment in basic social services – healthcare, education and social security. It is a painful practice that one Colombian congressperson likened to ‘conducting a complex surgery without the use of anaesthesia’.”

During this period of unrest, there was a great deal of opposition to the austerity measures from Colombia’s trade unions, with tens of thousands – some reports say millions – participating in nationwide strikes. This action came at a very dangerous time for trade union activists, as violence against them had been widespread throughout the 1990s. The Organisation of American States said that over 1,000 trade union members were murdered between 1991 and 1997.

Without a speedy recovery, Colombia was eventually shut out of international credit markets in 2002, and was only re-admitted after introducing fiscal responsibility laws to secure more IMF aid.

Although the recession dragged on for a number of years, Colombia’s economy eventually recovered and it proved one of the fastest growing in Latin America during the first decade of this century. But the issues which came to the fore at that time are still very prevalent. Colombia continues to borrow from the IMF and its foreign debt is currently at record levels.

Trade liberalisation has continued, particularly with the US-Colombia free trade agreement which was implemented in 2012 and which was again opposed by many trade unions. Privatisation, a process which accelerated following the IMF bailout, has continued under the presidencies of Álvaro Uribe and Juan Manuel Santos. In 2013 there were enormous protests against these neoliberal policies by workers and students. And now, most alarmingly, the drastic fall in oil prices and the value of the peso paint a worrying picture.

However, the Colombian government puts a more positive spin on things, high- lighting a so-called ‘intelligent austerity’ package, and pointing to a transitional period away from an economy propelled by oil and mining towards one based on agriculture and industrial production.

No doubt the low price of oil puts Colombia in a difficult economic position, but whether the current woes will prove as harmful as those of 1999 remains to be seen.

Perhaps a more pertinent question is about the future of the IMF, with some analysts suggesting that the Greek crisis has shaken the institution to its core.

While many are critical of the IMF, it remains the world’s biggest monetary lender, and if nations – in Latin America and across the globe – cannot look to it for a lifeline, they will have to look for alternatives. 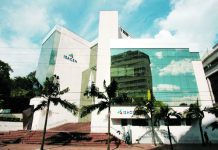 Blowing a fuse over Isagen