An upset-filled weekend that kicked off the NCAA men’s basketball tournament was a good start for many of the lower seeded teams who knocked off some heavy favorites. It was also the beginning of a storybook finish for two of Colombia’s native sons who are making the most of their senior seasons on the hardwood with their U.S. universities by leading them to the Round of 16.

Braian Angola of Villanueva in the Casnare department led his Florida State Seminoles in points (16), rebounds (6) and assists (3) in their 75-70 upset Sunday over the No. 1 seed Xavier Musketeers. Angola’s sharp shooting from the 3-point line helped his team in big moments throughout the game, but no moment was bigger than his steal with 45 seconds left that ended up giving FSU a three-point lead and, ultimately, the win.

The 9th-seeded Seminoles will now wait until Thursday for their “Sweet Sixteen” game to take on last year’s national runner-up Gonzaga. That game will tip off around 8 p.m. Colombian time.

Angola, the former Junior College player of the year, made headlines earlier this month when he was part of a tear-jerking moment on Senior Day (a celebration before the last home game for seniors) as his mother made an unexpected visit from Colombia without telling him.

When you fly in from Colombia to surprise your son on his Senior Day@Angola2411 pic.twitter.com/7aZBEVIYD0

For another four-year letterman from Colombia, Tonny Trocha, this year’s “March Madness” has been every bit as sweet. His Texas A&M Aggies dismantled defending national champion North Carolina on Sunday in an 86-65 blowout.

The 6 ft. 10 in. (2.08 meter) center from Cartagena had seven points, three rebounds, and two assists in the victory. Trocha has averaged six points and four rebounds per game in his four-year career in College Station, Texas.

Trocha and Texas A&M will look for a spot in the tournament’s “Elite Eight” when they take on the Michigan Wolverines on Thursday. Tip-off is at 5:37 p.m. Colombian time.

Trocha and Angola are both members of Colombia’s national basketball team and have been called up to play in the 2019 FIBA World in China. 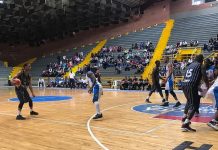