Colombia vs Paraguay is tomorrow at 2pm, Colombia are already group winners with two Copa América victories already under their belts. There’s little to play for, so the reserves are likely to get some game time, especially in goal as Ospina is not available.

Los Cafeteros pulled off another victory against Qatar on Thursday, but it didn’t come easy. Colombia was clearly in charge with the majority of the possession and the best chances. However, after James Rodríguez missed an easy early goal, it took them until the 85th minute to score – when Duván Zapata headed home a superb pass from James.

Since the rest of the group have drawn all their matches so far, that one-nil victory sealed Colombia’s first place. However, finishing top still means a tough quarter final match for Los Cafeteros on June 28. They’ll play the number two from a group that has both Uruguay and Chile in it at 6pm Colombian time.

But before that, tomorrow’s game against Paraguay offers manager Queiroz the perfect opportunity to give playing time to several players who haven’t yet put in an appearance.

It is a given that we will see a different goalkeeper. David Ospina is not available against Paraguay after he returned home on Friday to be with his seriously ill father.

Related: Colombia vs Qatar, will Colombia qualify for the quarterfinals?

His place will be taken by either Camilo Vargas from Deportivo Cali or Álvaro Montero from Deportes Tolima. Vargas has been the number two behind Ospina for the past five years, but it is rumoured that the Portuguese manager prefers taller goalies. At 1.95m, Montero is significantly taller than Vargas so we could see the Tolima player in goal.

The rest of the team is up in the air, but it seems likely that many of the reserves will play, such as centre backs Cristián Zapata and Jhon Lucumí, alongside fullbacks, Santiago Arias and Cristián Borja. Holding midfielders Gustavo Cuéllar and Jefferson Lerma could start, and Edwin Cardona should also get a chance.

Up front Duván Zapata, with two goals this tournament, seems to have the edge over Radamel Falcao to play in the quarterfinal. But as both started in only one game, either of them could be the attacking leader against Paraguay – and Roger Martínez might also get a shot at his favourite position. We could see Luis Díaz on the left wing and Juan Guillermo Cuadrado or Martínez on the right to finish the 4-3-3 system.

For Paraguay it is a big game, as a victory will guarantee they qualify for the next round. They brought a renewed team to this Copa América after their disastrous 2018 World Cup qualification. La Albirroja missed a golden opportunity in their last game against Argentina, when Derlis González missed a second-half penalty that could have clinched the victory and qualification. They don’t have many players in the big European leagues and lean on the talented Newcastle United attacking midfielder Miguel Almirón for creative impulse.

Both Colombia vs Paraguay and Argentina vs Qatar will kick off at 2pm on Sunday, June 23. 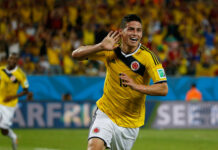