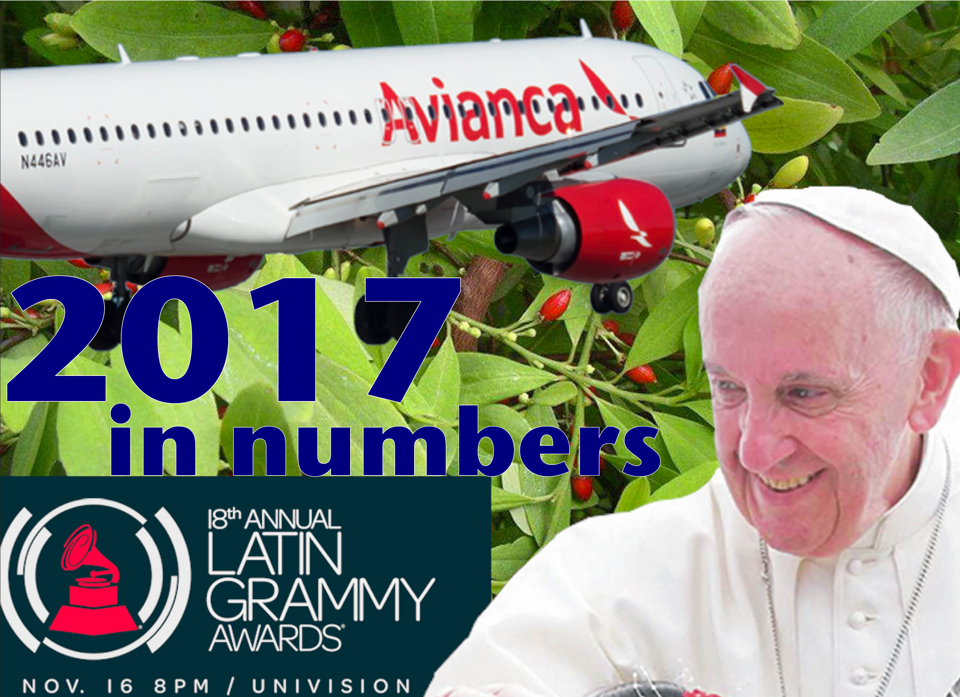 Colombia’s 2017 in numbers: At the end of what has been a transcendent year for Colombia, we take a look at some of the key events.

The number of people who died in the Mocoa landslide. The landslide, in the Putumayan village of Mocoa, took place between March 31 and April 1, killing over 300 and wounding many more.

The number of hectares of coca crops in Colombia in 2016, according to the UNODC annual report. The figure marks a 52% rise year on year from 2015 and is the highest figure in about 20 years.

The number of Venezuelans now residing in Colombia (legally and illegally) according to Migración Colombia in October 2017. The number is likely so high because of the ongoing political, economic and social crisis in the neighbouring country. 67,000 Venezuelans have received a PEP, a special permit allowing them to stay and work in Colombia for two years.

The number of flights cancelled by Avianca in one month of its pilots’ strike (between 20 September and 20 October). The strike, involving hundreds of pilots, caused disruption to travel throughout the country and affected over 360,000 passengers.

The amount, in USD, that the Colombian government spent on preparing for the Papal visit in September. The Pope visited the capital city Bogotá, as well as Villavicencio and Cartagena during his four-day visit.

The number of Colombians nominated for awards at the Latin Grammys 2017. The list included Shakira as well as reggaeton artists Maluma and J Balvin. Eight artists won, go to our story to find out more.

The number of magistrates who will make up the Special Jurisdiction for Peace – the transitional justice scheme which will be responsible for judging all crimes that occurred during the armed conflict. The judges were selected on 26 September.

Bogotá celebrated its 479th birthday on August 7. The day was celebrated with a Summer Festival featuring expositions, parades and artistic events.

June, a milestone that marked the beginning of the disarmament phase of the peace accords. The FARC turned in 30% of its weapons cache to the UN observation mission in Norte de Santander.

Martín Elías’s age when he was killed in a road accident travelling in the north of the country on April 14. The famous Vallenato singer, son of superstar Diomedes Díaz, was a budding musician and adored for his upbeat and catchy music.