As Odebrecht admits to bribery on a massive international scale, Emily Hastings examines the impact that corruption has on Colombia and how things might change in the future.

Corruption is one of the major ills of the modern age. It is present in every country, in business, in politics, and in sport. And it infects every aspect of people’s lives: their security, their job prospects, their democracies and their country’s economic development. It stops tax money from reaching schools and hospitals and allows the laws of the land, which are in place to protect citizens, to be subverted.

According to El Tiempo research published in December, private sector corruption cost the Colombian state an estimated COP$23 trillion (USD$7.78 billion) in 2016. That’s up 600% from the estimated COP$3.9 trillion lost in 2005, and is almost as much as the government hopes to make from the latest tax reforms by 2022.

In its 2016 Global Competitiveness Report, the World Economic Forum identified corruption as one of the main hindrances to the country’s development, while the GAN Business Anti Corruption Portal describes corruption as “a serious obstacle for companies operating or planning to invest in Colombia”.

People are getting tired of this. Polls last year consistently showed that Colombians feel corruption is damaging the country and in July, a Gallup poll showed that 85% believe the problem is getting worse.

But it’s far from just a Colombian problem. Recent years have seen a series of high profile corruption cases that have shocked the world – and even overturned governments – with Guatemala and Brazil both shaken to their cores by recent scandals.

Most recently, the staggering extent of the Odebrecht conglomerate’s activities came to light. The Brazilian company admitted to paying USD$788 million in bribes throughout 12 countries, including Colombia, to help secure construction contracts. It then agreed to pay a total of USD$3.5 billion in fines to the United States, Brazil and Switzerland.

According to Transparency International, an NGO dedicated to giving voice to victims and witnesses of corruption, Odebrecht spent USD$11 million in Colombia and received USD$50 million in benefits. In its home country of Brazil, USD$349 million bought the company a whopping USD$1.9 billion in extra cash.

The Colombian government has already announced it will void any of the contracts procured through bribery and corruption. However, Transparency International is calling for them to go further.

“The authorities in these countries need to act now on this information,” said the chair of the organisation, José Ugaz. “The bribery cannot be allowed to go unpunished. The evidence needs to be shared and those responsible need to be brought to justice.”

Authorities’ commitment to investigating and prosecuting such cases is an essential part of tackling misconduct.

According to Elisabeth Ungar, who has just stepped down from her position as executive director of the Colombian branch of Transparency International, having an active justice apparatus is one pillar of a “virtuous trinity” that has proved highly effective in other countries.

Speaking upon her return from an anti corruption conference in December, the expert – who also founded the first Colombian watchdog to follow Congress – explained that the second aspect of this trinity is a “civil society that mobilises and demands actions and sanctions against the corrupt”. The third is rigorous investigative journalism that will uncover and unravel the manoeuvres of those who abuse their power.

Interestingly, several members of the panel in a session on corruption at the Latin American World Economic Forum that took place last June in Medellín raised the point that the existence of these global scandals is actually indicative of change.

Brian Winter, editor in chief of Americas Quarterly magazine and vice-president of the Council of the Americas argued that the reason we are seeing so many high profile cases is because something different is playing out in terms of the exposure, public tolerance, and punishment of corruption.

Winter attributes this change firstly to the vast numbers of people who have risen out of poverty and whose more stable economic situations have enabled a shift in focus from hand-to-mouth expenses to the quality of the government and the utilisation of tax dollars. A second element is democracy and the growth of independent judicial institutions that work against corruption. Finally, Winter pionts to technology and social media: cases that would once have been buried no longer can be.

“The corruption that you saw in Brazil for example is incompatible with the age of the phone tap, the flash drive and the ballot box,” said Winter.

Despite a growing intolerance toward corruption, Colombia has not seen the huge social mobilisations that took place in countries like Brazil, Mexico and Guatemala last year. And Ungar, who was also on the panel, was particularly concerned with the risks of continued corruption in the country’s post-conflict situation.

He pointed out that peacebuilding is all about fostering trust and recovering the faith of citizens in their government. She added, “Corruption is also a question of human rights, poverty and citizen security.”

As new players enter the political arena, Ungar stressed the need to understand the practices that will be used by all political players to access and exercise power – particularly how their campaigns will be funded.

She was also concerned about the handling of resources. “We are near to seeing thousands of millions of dollars flowing in,” she said. “We must make sure these resources land where they should.”

Ungar believes the country needs to construct mechanisms to mitigate these risks – such as a training programme for citizens to help them follow up on the Havana agreements, along with a system for disseminating information that allows people to hold the government accountable. Additionally she calls for improved cooperation between agencies that are responsible for investigating and analysing corruption.

It is clear that in addition to holding the country back economically, corruption could also jeopardise the construction of a lasting peace.

So what is the country doing to combat this pernicious disease? The Penal Code and Anti-Corruption Act already criminalise several forms of bribery and corruption, and Colombia has also signed up to a number of international conventions against corruption. Last year, Congress passed a new Transnational Corruption Act; the country’s first foreign bribery law.

Colombia also participated in the 2016 Anti Corruption Summit in London, where it committed to a number of measures such as the creation of a Central Registry of Beneficial Ownership of National Companies, designing transparency standards for post-conflict expenditure and filing a bill to protect whistle blowers.

The challenge is that corruption – by definition – often manages to circumvent the law, which is why citizen action has been identified by so many commentators as a key driver for change.

Reassuringly, Ungar identified increased civil action against corruption as a possible positive by-product of the failed plebiscite. Noting the number of people that took to the streets to campaign for peace, she said “This background should serve as a motivation for citizens to mobilise against corruption. Hopefully very soon we can say that we are on the way to achieving it.” 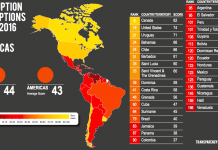 Corruption in Colombia: Do you feel the bite?