We spell out our love letter to a variety of acronyms found in the English language.

Lately we printed three articles using acronyms which really interested me. Two were guides to text speak in both English and Spanish and the other was an opinion piece using the word NIMBY (Not In My Back Yard).

Our language articles were both slightly dismissive of the many forms of abbreviated speech that have flourished with the rise of messenger apps. But, as I was reminded when I looked up the origins of NIMBY, acronyms have been around for longer than mobile phones and social media.

Acronyms are abbreviated words that are formed using the first letter or letters of a series of words. For example, NATO (North Atlantic Treaty Organization) or ASAP (As Soon As Possible). Or, to use a Colombian example: INVIMA (Instituto Nacional de Vigilancia de Medicamentos y Alimentos).

There are a lot of these words, which represent both organisations and common expressions, and they can be difficult for language learners to understand. If you are unsure about what an acronym means, there’s a handy online resource with thousands of definitions at acronymattic.

Then there’s also initialisms which are also formed using the first letter of each word, but cannot be spoken as complete words. Each letter is pronounced individually. For example DVD (Digital Versatile Disc) is spoken D-V-D or, to use a bit more text speak, BRB (Be Right Back) is B-R-B.

These forms of abbreviation continue to grow and form a lighthearted or irreverent aspect of the English language as original expressions change and develop.

Take NIMBY for example. First used in 1980 – or perhaps even before that – NIMBY-ism has sparked its own associated acronyms: NIABY – Not In Anyone’s Back Yard, NAMBI – Not Against My Business or Industry and (my personal favourite), BANANA – Build Absolutely Nothing Anywhere Near Anything. I’ll admit that until I started researching this article, I’d never heard of any of these new acronyms. But that is one of the fun things about these words; once they are adopted into the language, they can give birth to a whole family of related ones. It’s bananas!

How should I use them?

The other great thing about acronyms is that there are no absolute rules. Some writers put a full stop after each letter on the basis that each letter is an abbreviated word – here at The Bogotá Post, for example, we think that it is unnecessary and looks ugly.

And while initialisms are always written in capitals, some publications only capitalise the first letter for abbreviations that are pronounceable as words. In this newspaper, we write them both in capital letters unless the word has been officially accepted into the English language and is no longer viewed as an acronym.

What really matters is that whatever style you decide on, you must follow it and stay consistent.

You may not know it, but quite a few words like radar and modem were originally acronyms.

Modem stands for MOdulator-DEModulator and radar was coined in the 1940s as a quicker way of saying RAdio Detection And Ranging. Laser stands for Light Amplification by Stimulated Emission of Radiation and if you are a fan of scuba diving, the word scuba is an abbreviation for Self-Contained Underwater Breathing Apparatus. Try saying that with breathing apparatus in your mouth.

Those examples show that acronyms are very functional. Who wants to say Subscriber Identification Module card when they can say SIM card instead?

But some acronyms are more humorous and even cynical. And, in times when swearing was much less socially acceptable, acronyms allowed people to swear without swearing. For example, an acronym my mother still uses is SNAFU (Situation Normal: All Fucked Up), which – like going AWOL – has military origins. AWOL means ‘Absent Without Official Leave’ and was used by the military for a soldier who left their post without permission.

There are a variety of other military acronyms which have found their way into common use. SNAFU could progress to TARFUN (Things Are Really Fucked Up Now) and if things go really pear shaped, FUBAR (Fucked Up Beyond All Recognition). At that point, you might be tempted to tell your fellow soldiers FUBIO (Fuck You Buddy, I’m Out!).

There are even things called backronyms: reverse acronyms made to fit an existing word.

Some have become urban myths – words that people actually believe are real acronyms. Like golf, which some think stood for ‘Gentlemen Only, Ladies Forbidden.” Or the initialism SOS which is thought to mean ‘Save our Souls’ or ‘Save our Ships’, but was actually chosen because the morse code (dot dot dot – dash dash dash – dot dot dot) is simple and easy to remember in an emergency.

Some joke that Microsoft’s Bing search engine is an acronym for ‘Because It’s Not Google’ or that Ford stands for ‘Fix Or Repair Daily’. Have fun coming up with your own backronyms or new meanings for your name or company at nameacronym.net. Bogotá came out as ‘Brave Optimistic Glowing Open Transformative Agreeable’. Might need to work more on that one.

Another curious thing is that backronyms are sometimes completely unintentional. Have you heard about the kind family members sending the message WTF (What The Fuck?), believing that it means “well that’s fine”? Or the slightly bizarre message “your grandmother died last night. LOL.” LOL, in case you’re not sure, actually means ‘laughing out loud’, not ‘lots of love.’

It’s not only backronyms you can invent. With all the abbreviations used on social media and messenger applications, there is no better time to make up a few acronyms of your own. You never know, maybe in 50 years time they will have become mainstream and be explained in a newspaper article.

Purists like will tell you that an acronym has to be pronounceable as a word. Others will say that the English language has evolved and the category of acronyms now also includes initialisms. As with many things in language, the most important thing is to understand what the letters actually mean: people will always disagree about how to classify these words.

Oli’s big Topic: NIMBY pamby – Not In My Back Yard! 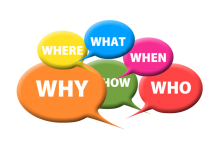 A question of language: How to form questions in English