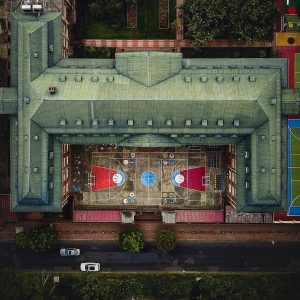 These extraordinary drone photographs of Bogotá have been doing the rounds on the internet. The Bogotá Post spoke to Camilo Monzon Navas, the man behind the lens of some of the most mesmerizing images of the Colombian capital this year.

Camilo Monzon knows what the view is like from above. Having spent the last 7 years working as creative director at Grey Advertising in Bogotá, he saw the heights that the corporate world could offer when he realised that he needed something more. “I was looking for an escape valve that removed me away from the rhythm of work and the quotidian.” he told us.

So in July Monzon went and bought himself a drone. Having played around with it for a few months he started flying it from the rooftop of his apartment building. “And I said to myself there’s something here, something muy chevre,” he said, recounting how the project Aerial Facades came about.

From there, the project took on a flight-path of its own, where highways, rooftops of buildings and domes on churchs all flatten out to form captivating spirals and criss-crosses of human achievement and activity. Monzon also doctored and combined some of the aerial images with ground-level photos to surreal and striking effect. Below is an example of one such picture of the Virgilio Barco Library: 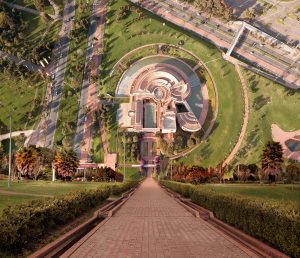 “It was about seeing the hidden face of Bogotá through its rooftops.” Monzon said, adding of the city that he was born and raised in, “I discovered that Bogotá has many places from the ground up, but from the sky it has millions. There’s millions of stories you can tell from the sky.” 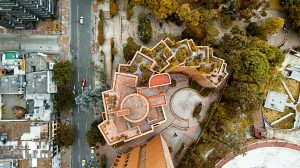 The pictures were taken with a Mavic Pro and Monzon was able to fly it over major avenues and highways across the capital, capturing Transmilenios as tiny red caterpillars and grander captivating structures cutting across light and shadow.

When Monzon first started out, he hadn’t expected the wide interest it would generate from the public or the media. ”I didn’t expect this kind of a reception because it was a personal project. But it was very rewarding to have the warm reception from the people that saw the photos.” 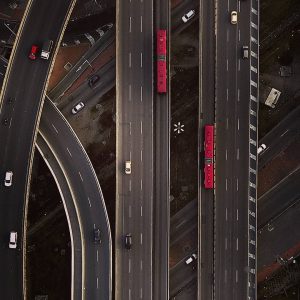 While reception has been warm, the weather in Bogotá hasn’t been as kind to his creative aspirations, constantly threatening any small time-window with the possibility of rain. Despite this however, Monzon manages to keep his head held high as he finds certain advantages as clouds appear during ‘the golden hour’ at around 5pm. “Clouds were a great light-diffuser and allowed me to play more easily between the contrast between light and shadow. I could capitalise on the bad weather and even benefit from it.” Monzon said. 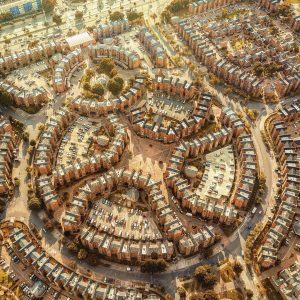