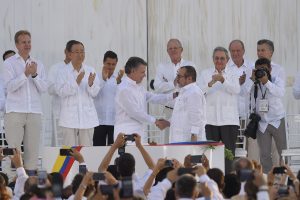 FARC presidential candidate Rodrigo Londoño, aka “Timochenko”, circulated a memo yesterday describing to members the methods by which he hopes to convert to electoral success.

“We are going to fill Colombia with these tactical units, whose first task will be to install the Casa de los Comunes (House of the Commons),” Londoño wrote in a letter that was then covered by El Spectador, “with diffusion centers of our platform, management commands, and organization of the campaign, meeting centers for young people, women, the artists, that is, the common people.”

The FARC leader issued the communication to members with specific instructions as to how to go about their campaign in the face of the challenges he perceives to be of relevance, “You have to be alert when traveling, make sure you get to where you want to go- do not venture to risky places…we have to disguise our true plans from those who wish to make us disappear, establish mechanisms other than the telephone to make appointments or convene meetings and if you have to use them, establish some codes in advance.”

The rebel group was legitimised last year through a congressional resolution which constituted the peace agreement by which FARC would be given 10 seats within the congress. “Without fear of being wrong, I can assure you that at this moment the consolidation of Peace in Colombia depends on us.” Londoño said of the deal.

Along with the peace agreement, the EU removed the FARC group from its terror-watch list last autumn, signalling international approval for the process and its terms. As the May election draws closer, the peace process will be tested, as both sides demonstrate their willingness to adhere to the terms within.

On Monday, Breitbart News covered the story of Londoño’s presidential run, conflating the group’s Marxist past, its history of drug and people trafficking, and the air of paranoia and military structure in Londoño’s tactics. Continuing to equate FARC with ‘Marxist terrorism’, the report decontextualised Londoño so as to suggest that the former rebel group was seeking to reinstate Marxist militias within the country.

Local media, however, have been more subdued in their analysis of Londoño’s words. To be sure, FARC’s past will remain a concern for many Colombians, and the tactics articulated will surely jar with more democratic sensibilities. But the leader’s sentiments also portrayed an appeal to the spirit of a renewed relationship with the established Colombian political system and ended with a hope that the process can serve as a model for solving other major conflicts around the world. “I accept FARC nomination to the presidency on two conditions”, Londoño’s letter stated, “first that the discordant and fatalistic voices are stopped, and second that we are going to work convinced that we are going to win over any obstacles that may come our way.”