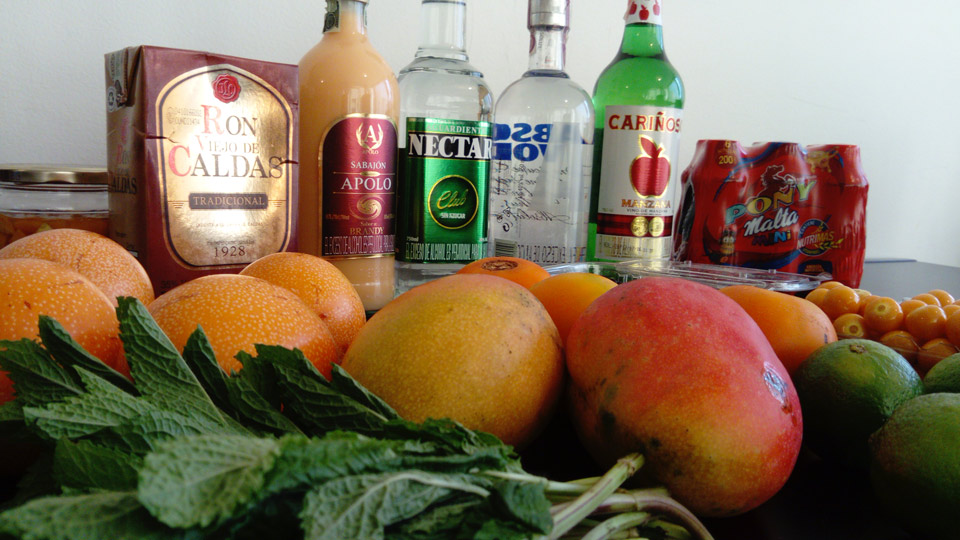 Our annual holiday tradition of throwing a bunch of ingredients together and calling them cocktails continues. This year, we mix our favourite spirits with Colombian fruits and, inexplicably, Pony Malta.

“So much sugar,” a Colombian friend shakes his head in the supermarket as I tell him we need some Pony Malta for our great cocktail experiment. “You better drink a lot of water.”

Inspired by a piece in VICE a while back – and by what has become a Bogotá Post tradition of marking the festive season by attempting crazy things in the kitchen – we decided to have a go at making our own cocktails using all-Colombian ingredients.

Related: This is the second of three alcoholic articles – check out our guide to budget wine and watch out for our aguardiente tasting.

Putting the Pony Malta to one side for a minute, nobody can deny that fruit is one of the most amazing and most Colombian of ingredients, so I figured we should start there. We also picked up a bottle of Cariñoso, the sparkling apple wine that has become a novena staple, a bottle of sabajón (which loosely translates as eggnog but was like no eggnog I’ve ever tasted). Throw in some mint, a carton of rum, a bottle of aguardiente and a bottle of vodka and we were set for a night of experimentation.

But which fruits go with which alcohol? Would anything go with guaro? And why are people so hard on the apple wine?

I wanted to be as scientific as possible and wanted to try soaking each fruit in each spirit – at least until I ran out of suitable soaking receptacles. From everything I’d read, the longer the fruit spends in the alcohol, the better.

And so, with not a lot of time to spare before my brave guests were set to arrive, I went about chopping up the fruit. I tried microwaving a couple to speed up the maceration, though it didn’t make a lot of difference. Ultimately, since we only consumed a fraction of the concoctions on the night, we were able to taste everything in the following weeks and see how each mixture matured, generating some surprising results.

Please note, measurements are approximate: add more or less of anything according to taste. 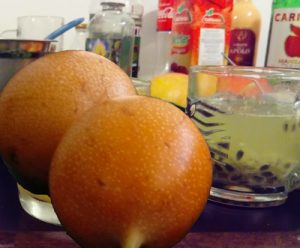 Granadilla was an instant hit when mixed with vodka and tonic. Perhaps because vodka and tonic work pretty well together even without the sweet cleanness of this delicious (if unappetising) fruit. Verdict: “Deli!” It worked well with rum too, giving the drink a deeper, more complex taste.

What was most surprising was the mix of granadilla with aguardiente. This mixture did not work on the first day, but after four or five days the flavour of the fruit had blended with and sharpness of the aguardiente causing it to mellow. In a blind tasting, everybody liked the strained liquid, though few could identify the aguardiente. Someone even wondered if it was was limoncello, which I think was a compliment.

Method: use approximately the same amount of alcohol to fruit. Shake well to break up the seeds. Leave for as much time as possible, at least overnight. While granadilla tasted great with all the spirits, it does resemble frogspawn so it’s worth straining before serving. Alternatively, try separating the seeds completely before the infusion by very lightly blending the granadilla with some water and straining. 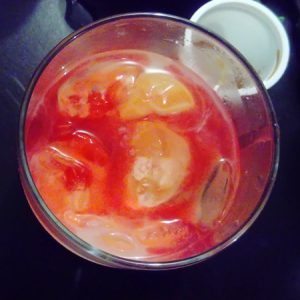 On the tasting night itself, these little berries weren’t a lot to write home about – though they did work well with the addition of a joker in the shape of tequila and lime. And after six days of soaking, it didn’t matter which alcohol we had used; all of them tasted the same. They were delicious. The earthy flavour of the agraz berries combined well with the cinnamon and allspice. The liqueur had a beautiful colour and was exquisite served with Sprite and ice.

Method: Fill jar with about double the quantity of fruit to alcohol. Add 2-3 teaspoons of sugar and a touch of whatever spices come to hand (we used fennel, allspice and cinnamon). Leave for at least five days, shaking from time to time. Strain and serve. 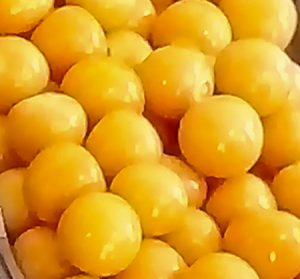 Uchuvas soaked in vodka worked really well served with ice and tonic. People also enjoyed the spirit-soaked uchuvas when served with cream as a dessert. The uchuva-rum combination, however, was an abject failure. The flavour of the rum just didn’t work with the sharpness of the uchuvas.

Method: Half or quarter the uchuvas. Throw in a couple whole ones, pricked with a cocktail stick (they make for an elegant garnish). Add a little sugar and cover with alcohol. Additional spices optional (cloves and cinnamon). Leave for at least three days, shaking occasionally. Strain and serve.

Unlike the uchuvas, rum was an excellent mix with mango. After six days the fruit had infused beautifully with the rum and spices, making for a much-improved Ron de Caldas and a much-improved mango.

Method: Make sure you use a really ripe mango – it’ll be sweeter and add more flavour. Chop the mangoes and add enough rum to completely cover the fruit. Mush the mango with a spoon/fork and add a bit of panela, a stick of cinnamon, a few cloves, and leave for a week. Strain and serve. Eat the mango. 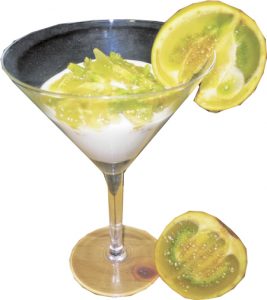 Lulo is a common ingredient on Bogotá cocktail menus and works well with many spirits, especially vodka, as several guests attested. The fruit’s robust citrusy flavour is strong enough to complement the aniseed of aguardiente, though it was mediocre mixed with rum. I’m also told that un-juiced lulo goes down a treat in a gin and tonic, just scoop some of the insides into your drink as if it were a slice of lime or cucumber.

Method: Juice the lulo (peel the fruit, chop it and blend with a little water and sugar). Strain and serve, foam and all. Serve with ice and alcohol of your choice.

We initially thought this would make for the most Colombian of all the cocktails – a kind of Colombian sangria. But no. Perhaps it was because the fruit didn’t have a chance to soak into the alcohol or because the mix of the fruits is already an intense flavour in its own right, but it didn’t matter what we mixed it with, the salpicón cocktails just didn’t fly.

Method: Just don’t. Unless you want to wade your way through thick, slightly unpleasant tasting juice, enjoy your salpicón without adding spirits. 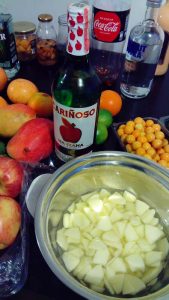 Give that beleaguered apple wine a new lease of life with this easy cocktail-punch.

Method: Soak apples in vodka and lime for at least one hour. Spoon approx 50ml into a glass. Top with equal parts apple juice and Cariñoso. Serve with ice and mint.

One guest was fighting off a cold, so we returned to a traditional hot toddy to ward off the chill.

Method: Heat all ingredients apart from the rum over a medium heat until mixture comes to the boil. Add rum, strain and serve. 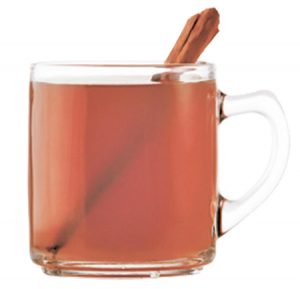 What to do with the Pony Malta? 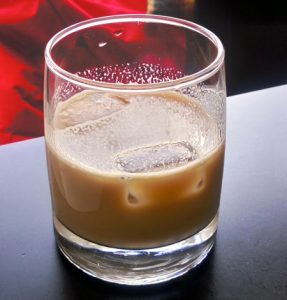 Buoyed by our successful Cariñoso makeover, we turned our attention to the Pony Malta. It didn’t mix well with the fruits, and a Pony Libre (simply mixed with rum) seemed a bit pedestrian, so we were delighted when one guest told us she had herd of of mixing stout drinks (not sure if Pony Malta qualified as one) with milk. Even more delighted to find the flavours actually worked.

Method: Mix and serve. Be brave and drink.

With that, our foray into cocktails and odd ingredients is over for another year. We never did find anything to do with the sabajón, which looks set to pass at least a year forlornly gathering dust at the back of a kitchen cupboard, as sabajón usually does.