The science of botany provides fertile ground for Guillermo Quintero’s documentary Homo Botanicus – a well-paced and intimate portrayal of a botanist and his apprentice as they venture into the Amazonian jungle.

In Homo Botanicus, director Guillermo Quintero takes a romantic approach towards botany, a profession as ancient as the plants it studies. Here we meet Julio Betancur, a recognised botanist who has dedicated over 27 years of his life to studying, collecting and protecting the many species of plants he has found in Colombia.

His disciple Cristian Castro, who admires the professor and shares his love of botany, is at his side. Together, teacher and pupil adventure deep into the Amazonian jungle to find new plants to study and, hopefully, add to Julio’s vast collection, which has reached over 19,000 samples.

Quintero manages to make the camera invisible. This non-invasive approach makes for intimate viewing; our two characters can express themselves as if no one is watching, a pure ethnographic documentary in a modern world.

Related: The new Cinemateca is open

Throughout the film we witness the admiration between master and disciple and the love they feel for their plants. It is also through Julio and Cristian that we come to understand the importance of botany, a theme that is easily ignored or considered old fashioned in this modern world.

Given the small cast, lack of a musical score and the subject matter itself, it may come as a surprise to hear that the 90-minute runtime does not drag at all. While the characters – like their environment – are passive and calm, the movie itself maintains a decent pace.

Indeed, Julio and Cristian are strong enough to carry the whole film on their shoulders. Their charisma and enthusiasm engaging. And the honesty of their reactions when they find a new plant makes us feel we are witnessing something special. Their passion for these plants is such that they even compare it to the passion two people may feel for each other.

The voice of Quintero appears off screen as an auteur and acts as a transition between scenes. It complements the profound conversations between master and disciple, providing more depth to topics like the goal of botany or the constantly changing environment.

Quintero pushes the film into the realm of poetry using narrative resources such as archive images, blossoming plant , and panoramic shots that lift the Colombian countryside. It feels as if the filmmaker is trying to express his love for this world and its science through moving images and, most importantly, trying to share said love with the viewer.

The immense love for botany felt by the people behind the lens – and those in front of it – is palpable on screen. For those with little or no knowledge of the subject, this will be an enjoyable film. For those who dedicate their lives to this branch of biology, it is an absolute must-see; they will definitely fall in love with both the characters and the film itself. 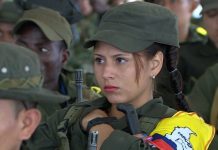