It’s lights, history and reggaeton as Chris Erb guides us through some of the unusual Colombian festivals that will round out 2016.

Colombia boasts more days off than almost any other country on earth. Over the course of the year, there are nearly 20 public holidays, so it is hardly surprising that the country is awash with festivals. With all those days off, it’s only natural that people would want to mark them with a party or two.

While some of the Colombian festivals such as the Carnaval de Barranquilla and Pasto’s Carnaval de Blancos y Negros are world famous, many are smaller affairs. Some have somewhat religious themes, while others celebrate a food or economic activity that is particular to that town or region, like feijoas (a type of fruit) or flower growing.

With the holiday season fast approaching, it’s time to start marking your calendars and getting out to discover some of the myriad Colombian festivals and celebrations that this country is famous for. Watch out for our January edition too, as we’ll be looking ahead to some of the best and most unusual festivals 2017 has to offer.

For many people, Christmas means decking out their house with lots and lots of lights. Few places take this tradition more seriously than Villa de Leyva in central Boyacá, which is also famous for its kite festival in August and onion beauty pageant in October. On December 7, to mark the beginning of the festive season, residents celebrate with choral presentations and fireworks. Elaborate light displays on the streets and houses of this chilly but tourist-friendly  historical town add to the festive charm.

Paisas have held this annual celebration of their myths and legends since 1974 with a huge parade featuring elaborate puppets and costumes. Participants come from towns and cities across Antioquia to represent their local legends in the parade that starts at the Teatro Pablo Tobón Uribe. Not only is it a fun and colourful parade, it’s also a good place to learn about some of Colombia’s rich culture of folklore and storytelling.

Residents of the small town of Chiquinquira in western Boyacá celebrate Christmas early, with music, artists, and a large parade. It’s one of the oldest festivals in the country and a great way to immerse yourself in a typical celebration.

Cali’s biggest festival, mostly dedicated to music, runs for five days between Christmas and New Year. This year’s “Súper Concierto” will feature Romeo Santos and reggaeton superstar Maluma. There’s much more than concerts and dancing though as you can also take in sporting events, antique car parades, and lots of food. If you were looking forward to the annual cabalgata (horse parade), you will be disappointed as the city has cancelled this year’s edition in the name of modernity.

Various dates in December and January

This festival in Bogotá’s historic neighbourhood of Egipto may be the oldest in the city, having recently celebrated its 100th year. In 2005 it was declared a patrimonio cultural de la ciudad. While the majority of the activities such as traditional games and concerts will happen early next year, a number of events will take place around the Iglesia de Nuestra Señora de Egipto during the novenas. This is a great opportunity to get to know a historic and beautiful neighbourhood that is all too often labelled a no-go area for tourists and locals alike.

Declared by UNESCO as a Masterpiece of the Oral and Intangible Heritage of Humanity, Pasto’s Carnaval de Negros y Blancos celebrates a number of ancestral celebrations dating back to when this used to be a day off for black slaves in the city. Each day features a different activity but the festival is best known for its parade of giant colourful puppets, along with the third ‘white’ day of the festival where revellers throw talcum powder at each other. 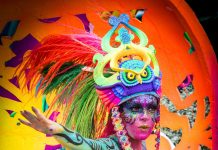