As passenger numbers grow and profits increase worldwide, the aviation industry believes Colombian airlines might offer lofty returns, though there may be some turbulence ahead.

Commercial airlines posted record worldwide profits in 2016, suggesting the traditionally volatile aviation industry could be an attractive proposition for investors. According to the International Air Transport Association (IATA) 2017 Annual Review, last year the industry made a net profit of USD$34.8 billion on revenues of USD$705 billion and a return on invested capital of 9.9%

Even Warren Buffett, who famously called the airline industry a “death trap for investors” in 2013, has changed his tune.

The IATA report, published on June 2, shows significant regional variations with numbers driven by strong performances in North America, Europe and Asia-Pacific, while Latin American carriers generated only just did better than breaking even. However, it adds that “Latin American airlines are starting to see a turnaround in what has been their otherwise harsh environment recently.”

Our favourite airspace, Colombia, is registering rapid growth, with soaring tourism numbers and increasing air capacity. In 2016, not only did 5.1 million tourists visit Colombia – an increase of 14% on the year before – but there were a total of 35.7 million passenger journeys. There are now 27 international airlines serving the country, seven of which have joined in the past five years. The country also boasts 80 international routes, up from 68 in 2011. Colombia’s three largest airlines posted increased Q1 operating incomes for 2017.

In fact, Peter Cerda, IATA’s regional vice-president for the Americas, sees enormous potential for the whole of Latin America, saying that passenger growth is expected to double by 2034. He estimates that “the air transport industry’s contribution to regional GDP could jump from USD$140 billion to USD$322 billion.”

He continued: “People want and need to make connections across the continent and globally, and business relies on efficient air links to distant markets. Unfortunately governments in the region are hindering sustainable growth with chronic infrastructure deficiencies and debilitating regulation.”

These are issues that face the industry as a whole, alongside challenges such as increasing fuel costs, taxes and fees. Colombia is not immune to these, but has improved its prospects with hefty infrastructure investments recently – particularly in roads, ports and airports. The country’s mountainous terrain makes air travel an attractive option for both passenger and cargo transport.

The expansion of the El Dorado airport alone has required an investment of COP$2.4 trillion. It is already the biggest regional hub for cargo and the third busiest for passengers. Over the past six years, the parking platform for planes has been significantly expanded, along with the passenger terminal space, so the airport now has the capacity to serve 40 million passengers a year.

In addition to the El Dorado airport expansion, the government has invested COP$3 billion in modernising and expanding 58 airports throughout the country.

While 2016 was a good year, airlines worldwide, and Colombian airlines particularly, still have to work hard to remain competitive and to make the most of the opportunities presented by growing tourism and improved infrastructure.

Low cost airlines got off to a slow start in Latin America, but are now gaining momentum. The main two low cost Colombian airlines are VivaColombia and Wingo, which was launched by Copa Airlines at the end of last year.

On June 20, VivaColombia, which is part of Panama-based Viva Air and part owned by Ryanair founders, Irelandia Aviation, announced that it would be buying a fleet of 50 new aircraft that are more fuel efficient and have more seats in order to consolidate their position as the region’s leading low-cost airline.

“These new aircraft will provide savings of up to 15% in fuel, 14% in operating costs and 5% in maintenance, which will allow us to provide savings in the pockets of our customers and thus continue to grow as the leading low cost airline in Latin America,” said William Shaw, CEO and founder of VivaColombia.

Such is Shaw’s dedication to making air travel affordable that he recently told media in Miami that VivaColombia would consider flights where people could fly standing up, a publicity stunt that will jog the memories of those readers who remember Ryanair’s previous outlandish marketing campaigns. Indeed, the alleged proposal was quickly rejected by Colombia’s aviation authorities. Expect Shaw to be getting his firm some more free publicity soon by telling a gullible journalist that he might charge passengers to use his planes’ bathrooms.

While VivaColombia is aggressively pursuing a traditional low cost model, for many companies the traditional lines between low-cost carriers and full service carriers have become blurred. A PwC report on 2017 aviation trends identifies a “morphing and melding in competitive positioning” driven by varying customer needs.

This is reflected in the strategy of LATAM, one of the leading operating Colombian airlines. The company announced in November 2016 that their new customer-focused model would allow passengers to choose how they want to fly, paying only for the services or experiences they want.

LATAM, which was formed when Chile’s and Brazil’s national carriers, LAN and TAM, merged in 2012, recently launched Mercado LATAM in Colombia, which offers a menu of over 50 products on sale in-flight.

“Mercado LATAM is the first step in the evolution of the airline’s new travel model which offers our passengers more options, flexible rates and a made to measure trip,” said Fernando Poitevin, executive director of LATAM Airlines Colombia. They are offering four different packages for domestic flights, with cheaper fares for hand luggage only or unassigned seating.

The company hopes that the model will allow them to increase the number of passengers in countries where it has domestic operations by 50% by 2020.

Meanwhile, the country’s aviation heavyweight Avianca, which held a 61% share of the market last year, has been unfazed by the newcomers. According to a report by CAPA, the Centre of Aviation, the company has no plans to create a low-cost subsidiary, believing it already has the necessary scale to compete.

About 45% of Avianca’s revenues come from Colombia, but the company is now focusing on expanding its international network, with plans for new routes to Argentina and Germany as well as becoming the first Latin American airline to offer inflight broadband Wi-Fi.

Colombian airlines can be fairly confident of an increase in both domestic and international tourism, and all have adopted different models to take advantage of this potential market growth. Time will tell whether one model can outperform the others 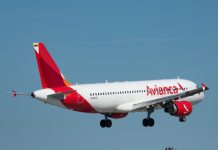 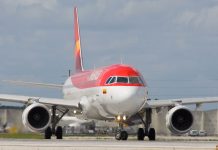