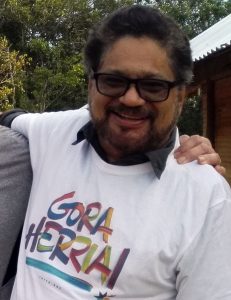 Former FARC leader and chief peace negotiator Iván Márquez has decided to relocate to the Espacio Territorial de Miravalle, a rural camp for ex-guerrillas, in his native Caquetá province.

In a letter he sent to the UNIPEP and UPC (the special police body charged with enforcing peace in conflict zones, and the National Protection Unit of Colombia, respectively), he claims that he plans to stay there “until there is more clarity and certainty about what comes next”. In the meantime, however, he vows to continue to comply with the implementation of the Peace Agreement and oversee the reintegration process of ex FARC soldiers.

The exact motives for his decision to relocate remain unclear, but there are rumours he could be the next former FARC member to be investigated as part of a US drugs investigation. According to Interior Minister Guillermo Rivera, however, Márquez reportedly told him that his intention was to interact with some of the 7,000 former FARC members who are now located in the Colombian countryside.

After the recent arrest of former FARC colleague Jésus Santrich, the timing of his decision to abandon Bogotá has led members of the public to come to their own conclusions. Santrich was arrested on April 9th, suspected of attempting to smuggle 10 tons of cocaine into the US, as part of a collaboration with Mexico’s Sinaloa cartel.

With regards to criminal activity, the 2016 Peace Accord stipulates that crimes committed after Dec 1st 2016 may be subject to extradition to the US. It is now up to the courts to decide on what specific date Santrich’s crimes were committed, and if they have indeed been committed after the specified date, he may be liable to extradition.

Santrich has already suggested that Márquez could be the next member of the former guerrilla party to be arrested, along with his nephew Marlon Marín, who has already been arrested and taken to New York.

For now, though, both Márquez and Santrich maintain that his arrest is part of a plan orchestrated by the US government with Colombian backing, and encourage public intervention. On April 20th, it was reported by ABC news that Santrich was on his 12th day of a hunger strike, in protest of his detention.

In a press conference that took place the morning after Santrich’s arrest, Márquez stated that he believed the peace process was “facing its most critical moment”. Both former FARC members were set to take seats in the parliamentary portion allocated to the new political party, which now goes by the same name as the former guerrilla group. However, their ability to legally have a say in Colombian politics looks increasingly unlikely.