The commemoration of Colombia’s National Day of Solidarity for Victims of the Armed Conflict was muted this year as the novel coronavirus lockdown forced individuals to shelter-in-place.

April 9 in Colombia is typically a day filled with speeches, commemorative walks and symbolic performances – in remembrance of the victims of the armed conflict, as well as the death of Jorge Eliécer Gaitán. The liberal presidential hopeful was shot on April 9, 1948, and his assassination sparked the city-wide revolt known as the Bogotazo which launched the country into a decade of conflict.

This year, however, the remembrance was muted. The countrywide lockdown limited governmental organisations, NGOs, and political leaders from both sides of the spectrum to only tweets and commemorations through social media. The Centre of Memory, Reconciliation and Peace offered several virtual platforms to learn more about the historical importance of the day on their Twitter feed and website. That includes El dia del odio (The Day of Hate), a work which recounts Gaitán’s death, available on their website for all interested readers.

In a speech, Bogotá’s mayor Claudia López spoke of the importance of remembering the past and the actions her administration is taking to ensure Bogotá is a safe haven for victims of the conflict. “Every day, every year, every 9 of April, we affirm our commitment to the victims of the Colombian armed conflict. We remember their pain to honour it, their memory to respect it, their rights to fulfil them. That is what it means to be the epicentre of peace and reconciliation.”

More than three years have passed since Colombia signed a historic peace agreement with the FARC. The conflict left over eight million victims and seven million displaced. One million of those victims currently live in Bogotá, according to the alcalde.

Since then, implementing the accord has been an uphill journey. While we’ve seen important advances such as the disarmament of the FARC and its transition to a legal political party, the process towards a lasting peace has been dogged by violence in rural Colombia, a rise in the activities of illegal armed actors and the killing of social leaders. Indepaz reports 816 leaders have been assassinated since the treaty was signed, as of March 26 of this year. There has been limited progress when it comes to land reform, effective reintegration of ex-FARC members, and improving electricity and water provision in rural areas. The Kroc Institute of Notre Dame concluded that, two years after the peace treaty was signed, nearly two-thirds of the 578 provisions had zero or minimal implementation.

And now, the COVID-19 pandemic has piled further difficulties onto implementation. The Organization of American States (OEA) has warned that the quarantine and health risks brought by the virus will also leave rural communities more at risk to illegal armed groups. The Washington Office on Latin America has confirmed via reports from various human rights organizations that “despite the national quarantine in Colombia, killings and attacks on social leaders and armed confrontations continue and have become more targeted.”  Not only that, but the economic impact of the shutdown is sure to hit the country’s most vulnerable.

While we could not march last week in memory of Gaitán, Colombia’s leaders could honour his memory by acting to support those hardest hit by the coronavirus lockdown.

On April 9, at approximately one in the afternoon, three bullets sliced through the air and lodged themselves into Jorge Eliécer Gaitán’s head and torso. It was 1948, and he was the favoured candidate for the upcoming presidential elections. Less than an hour after the attack, the central hospital announced his death and crowds rioted.

Some historians and reporters call Gaitán ‘la voz del pueblo’ for his charismatic and accessible speeches, support for workers, and rejection of the corrupt ruling oligarchy. While political opponents despectively called him “el negro” or “el indio,” referring to his darker hue of skin and humble background, Gaitán reclaimed those names as he fought for the rights of Afrocolombians and indigenous groups throughout his political career.

In a previous interview with The Bogota Post, historian Arnovy Fajardo Barragán expounded on Gaitán’s principal idea of “two Colombias”: one was composed of peasants, workers and small plot-holders, while the other was a “political country” of a ruling political and economic oligarchical class. As Barragán explained, “Gaitán proposed that a ruling class should be based on merit, and be conscious of people’s needs, so that it ruled for the benefit of everyone.”

Gaitán’s assassination ended his call for a political revolution, and the result was devastating. Mass rioting left the city of Bogotá in tatters, and launched the country into a decade of violence (known as la Violencia) between the conservative and liberal parties. Six years after the conservatives and liberals agreed to end their fighting, two guerrilla groups were established that dragged Colombia into over half a century of armed conflict. The reverberations are still felt today, in particular among the Afrocolombian, indigenous, rural, and working communities who Gaitán resolutely defended. 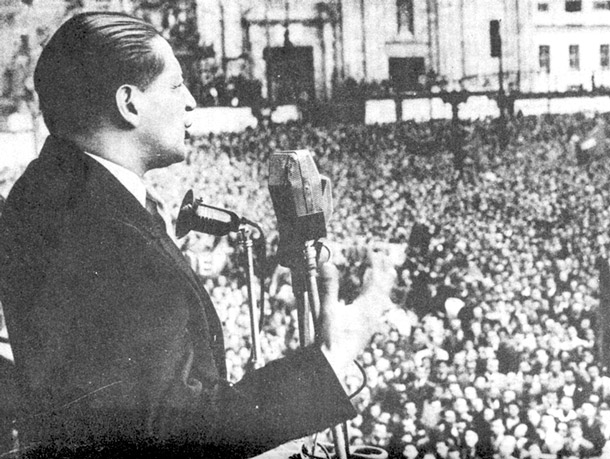 In context: Jorge Eliécer Gaitán and the significance of April 9