The 21-year-old sprinter from Antioquía is the current World Champion and came to the Olympics as one of the favourites for a gold medal in the omnium, but his form was ultimately no quite good enough to secure a medal across the discipline’s six events. Gaviria started well, finishing fifth in the scratch race, but tenth place in the individual pursuit and third in the elimination race – both events he won at the World Championship earlier this year – saw him end the first day ranked fifth overall.Day 2 of the omnium didn’t start much better for Gaviria with the fourth place in the time trial, followed by a disappointing tenth place in the flying lap. By that point he had dropped down to seventh ahead and looked to be out of contention for a podium finish.

Elia Viviani started the final event with a 38-point advantage over Gaviria while Mark Cavendish was 22 points ahead in second place. However, Gaviria escaped the pack and was on his way to taking a lap advantage over his rivals when Cavendish swerved sharply, causing a crash in which Viviani himself was involved. The Italian quickly made his way back into the pack and Cavendish escaped with a warning – but it also meant that Gaviria was back in the hunt for the medals.

The race looked open, but the extra lap had taken its toll and Viviani, Cavendish and Hansen from Denmark kept scoring points. With a final effort in the last eight laps, Gaviria attempted to close the gap on the leaders – but it wasn’t enough and he had to settle for the fourth place.

Gaviria was clear in his assessment of his performance, saying “I failed, I just wasn’t good enough – not today nor yesterday.” The team Etixx-QuickStep sprinter also made the announcement that his focus is now going to be solely road cycling. 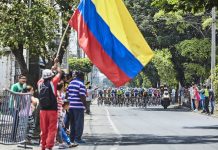