Estéreo Picnic is back again and bigger than ever. Find out what’s going down at the event.

No Colombian band is close to tropical electro legends Bomba Estéreo when it comes to sheer size, as they can go toe-to-toe with any of the big foreign names. We spoke to founder and bassist Simón Mejía about the importance of the festival and their responsibilities as elder statesmen of Colombian contemporary music.

“We’ve played in lots of different festivals, but Colombia is special for us,” said Simón. As the most important alternative rock and electronica festival in the country, it’s entirely appropriate to be featuring one of Colombia’s musical heavyweights from the scene. They don’t fit into any genre, but they are undoubtedly perfect for Estéreo Picnic – a massive party in the shape of five rulebreakers on stage.

Colombian music is often very traditional, but Bomba play with genres and ignore pigeonholes. “It’s something that comes from the inside, right from the guts. Creativity is important for us.” No one would argue that Bomba Estéreo sound anything other than very Colombian nor could they argue that they are following a rigid traditional formula for cumbia. That’s what gives them their fuego. 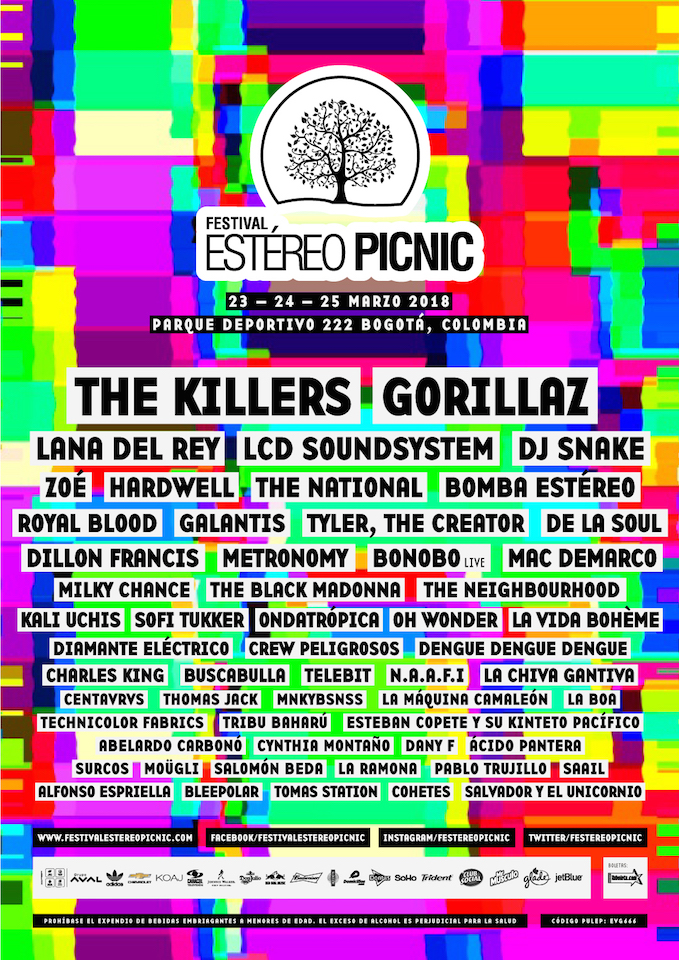 For any young band starting out in Colombia, Bomba Estéreo are an obvious example that the sky’s the limit in terms of success and Mejía recognises this. “I’m happy to think that younger bands look at us. Hopefully we can inspire a younger generation.” If you want to hear Colombian sounds for a new generation, check them out as they blow up the stage straight before Gorillaz on Saturday at 10pm.

Transport is usually a right nightmare for Estéreo Picnic, as it lies on the outskirts of the city. This year, though, the festival has laid on a whole bunch of options for the masses descending on Parque 222. Also, with the festival being a Fri-Sat affair and not Thurs-Sun, there’s only one day of peak hour traffic hell to deal with.

Buses are the starter option, weighing in at $10,000 one-way or $15,000 return from various points across the city. If you’re in a big group, think about a van. It’ll take you and nine mates from one point in the city to the festival, wait and then drop you at two points on the way back. That comes in at 300 grand.

The adventurous might want to hop on a train – a rare pleasure indeed in the big bad Bog. $50,000 brings you from Usaquén to the festival. If you want to go ‘full beam’, there’s even a helicopter service available. Although, if you’re even thinking about a helicopter to a music festival, you probably need to have a word with yourself.

Expect all the usual goodies at a festival of this ilk – unlike Rock al parque, you’ll not be going home with food poisoning. You’ll need food as well – the acts go deeper into the night than a ñero’s knife into a soft gomelo belly. Enjoy the comedown on your long 2am trek down the autopista, fried off your tits on top class E-stéreo Picnic.