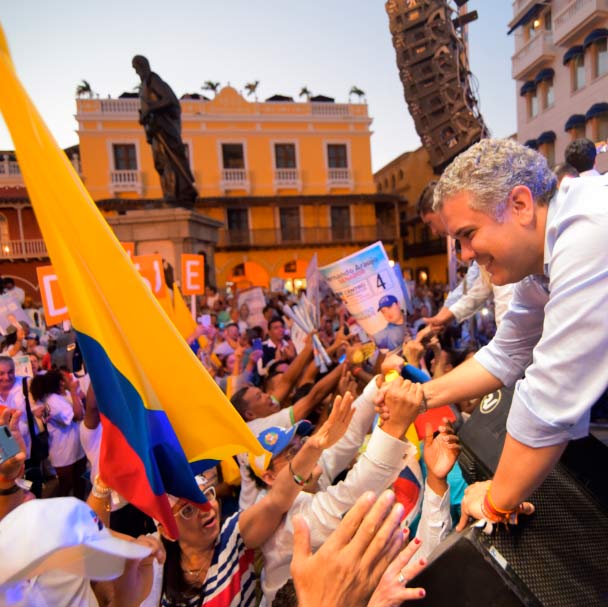 After an intense and at times surprising campaign, Iván Duque has been elected as the 116th Colombian president. It was a historic election, given that it is the first time that members of the FARC have been able to cast their votes – even though they withdrew their presidential candidate in the early stages of the race.

Find out about what his presidency may mean for the country.

The results started to come in soon after polling finished at 4pm. Early on, the votes were trending towards a Duque victory and by 5pm with 99% of the vote counted, it was clear that the Centro Democrático candidate had won.

President Santos tweeted: “I called Iván Duque to congratulate him and wish him the best of luck, and I offered the complete cooperation of the government to make this transition as smooth as possible.”

In spite of the factors that might have kept people at home, voter turnout matched the high figures we saw in the first round. While Father’s Day had officially been pushed to next week, the big Mexico-Germany match was expected to overshadow the election. However, if the noisy celebrations on the streets of Bogotá are anything to go by, politics still have the power to stir the nation’s spirit – especially at this crucial time.

What does Duque’s presidency mean for peace?

In comparison to election days of the past, today’s election reflected the changes that have taken place in recent years – and in spite of last night’s news that the ELN had not agreed to a ceasefire. President Santos announced from the unified command post, “Fortunately I want to report that we don’t have any news. This is good news.”

Even after doubling the figures from the first round, voto en blanco received just 4% of the vote, much less than predicted after Fajardo and De la Calle had announced their intention of a protest vote.

Whatever candidate you supported, there are reasons to be optimistic. The day passed without major incidents, and with a relatively high turnout it’s a victory for democracy.

As Jean Marie Chenou, Senior Professor at Universidad de los Andes told us, “Independent from the final result, this presidential election evidenced a vivid democracy. Participation in the first round was the highest in decades. Two candidates with clear and very different political projects qualified for the second round.”

The rise of Petro has been a monumental one. It is easy to forget that in living memory, three populist candidates have been assassinated. Gaitan, Pizzaro – like Petro, a former M19 member – and Galan were all killed before they could reach a public vote.

Over the past 50 years, it has been difficult for a credible left to develop in Colombia because of the associations with the FARC and other guerrilla groups. For the last two hundred years, Colombia has been a stronghold in the region for conservative politics. Even though Duque’s victory supports the status quo, the fact that Petro was able to reach the second round and win 42% per cent of the vote is evidence of a huge structural change.

As Chenou explained, “With the FARC becoming a political party and the ELN negotiating a peace agreement, the left is becoming a credible and acceptable political option.”

He added, “It remains to be seen how the left can organise itself as a political force in the Congress and in relation with social movements if they are in the opposition.”

Finally, the professor had wise words about polarisation. “I would rather call politicisation what has sometimes been described as polarisation in the country. People care about politics and took a position in favour of one political project or against the other. These were indeed very different, almost opposite, political projects, which naturally generated heated debates in a highly fragmented society.”

With ley seca still in force and a high-security presence throughout the country, one can only hope that these high feelings do not spill into violence.