The constitutional court has ruled in favour of miners and residents in the town of Marmato, Caldas, by ordering the Canadian company Gran Colombia Gold to perform “prior consultation” with residents before continuing with their open-pit gold-mining operations.

Judge Vargas sided with the town’s approximately 5,000 families, who have been making a living out of gold mining for decades, an industry that represents about 80% of the town’s economy in his ruling at the end of February.

In 2007, Gran Colombia Gold arrived into the territory and acquired the exploitation titles for the El Burro hill mining site, for what residents claim was a “very low” price. The mine is estimated to have 14 million ounces of gold and 90 million ounces of silver.

The company then began a process to remove the miners, who were at that point working illegally in the mines, in order to begin its operations.

However, this process was hindered by local authorities who argued that social and economic problems would worsen if traditional miners were evicted from the territory.

The constitutional court ruling puts an end to this ten year conflict and will require the company to consult indigenous and afro-descendent communities – effectively stopping its exploitations and suspending the eviction order in place.

In turn, Gran Colombia Gold has announced that it intends to sue the government for USD$700 million on the basis that Colombia is breaking the terms of their free trade agreement with Canada. They cite three main grievances: The first is that they have been unable to move ahead with operations in Antioquia due to ELN pressure. They also object to delays in the removal of illegal miners who operate inside the areas where they hold mining rights. Finally, they claim a lack of effective action in the face of strikes and disturbances that have generated damage to their infrastructure.

The company and the Ministry of Mining have until the end of March to solve the dispute, after which the company will take its suit to an international tribunal to proceed. While economists worry about the repercussions of what is seen as a hostile ruling towards the industry, others hail the decision as a victory for traditional mining communities. 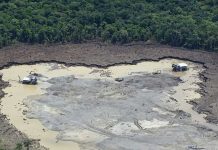