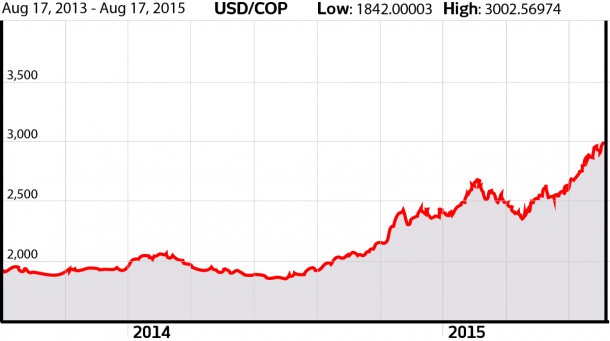 For all those worrying about how far their pesos may stretch abroad, Olly West analyses the rapidly depreciating Colombian peso, and looks at which factors could reverse or exacerbate the trend

If conversation topics in pubs across Bogota and on various expat Facebook groups are anything to go by, the sharp devaluation of Colombia’s currency is a subject that never gets old. Colombian peso-earning teachers and the like are fretting about the cost of their next trip home, while employees of foreign companies are revelling in the 30%-off-everything privileges that their dollar-denominated salaries afford them.

Is now the time to cash in your dollars, pounds and euros? Or, should you be converting your peso savings into your home currency before they lose even more of their value?

Well the first thing to have in mind is that second-guessing the FX markets (financial jargon for where the values of currencies are determined) is extremely difficult — even for those whose living depends on doing so. In the short term, it’s nigh on impossible. Bancolombia’s last forecast on August 14 is for the Colombian peso to end the year in its current range of between COP $2,800 and COP $3,000 to the dollar, so even the professionals are not going out on a limb with their predictions.

So what can I do?

We assume most of our readers are here because of a life choice, rather than to set up a hedge fund and bet on currency markets. Unless it’s your job, torturing yourself over perceived “losses” from currency movements is futile: you can just as easily lose as win. So if you’re wondering how to pick which of the 30 days you have to cash in that international bank transfer waiting for you in your Colombian bank, don’t waste your time — it is almost impossible to call. Likewise, if you need your home currency now and only own pesos, there’s not much you can do.

Of course, if you regularly have to spend money both in Colombia and at home, and have the luxury of being able to save, then it’s prudent to put some of your home currency with your savings when you like the look of the rate. That way, when you go home and the exchange rate is looking scary, you can spend the money you previously transferred and not have to “think in pesos”.

It does make sense to keep an eye on a few factors that could affect the attractiveness of the peso in the coming months. So the second thing to remember is that the price of a currency is not something randomly invented and placed on XE.com each morning. Colombia has what’s known as a free-floating currency, meaning that simple supply and demand dynamics apply: the more people who buy the Colombian peso, the more the peso will be worth. By the same token, the more people who sell the peso, the lower its value. In reality, you never “convert” one currency into another, you buy one currency by selling another — and the price is determined by how much other people will pay for the currency you’re selling.

Oil-related industries reached around 65% of Colombia’s exports during the economic boom, so the rapid tumble of global oil prices (from over US $100 per barrel to just over US $42 in less than a year) was always going to hit the currency hard. Cheaper oil means fewer dollars buying Colombian exports, lower government revenues from oil royalties, and less investment from oil companies. If foreigners want to do business with Colombia, they have to buy pesos, so it is easy to see why oil is easily the most responsible party in the fall of the Colombian peso from below COP $1,900 to the dollar a year ago to nearly COP $3,000 today.

Of course, oil can go up as well as down, and if the commodity increases in price then expect a strengthening of the Colombian peso. Will that happen? Economists write pages and pages on oil price forecasts each week, and opinions are generally divided (few predicted the dramatic decline in the oil price before it began). Just bear in mind that your Colombian savings could be at the mercy of Middle Eastern politics…

Should Colombia’s slowing economy show signs of recovery, this would encourage investment, which would consequently support the value of the Colombian peso. Given the dominance of oil, this is a tough ask without a recovery in the oil price. Theoretically, the weaker currency should make life easier for other export sectors, but other commodity prices such as coffee are also at lows, and the manufacturing industry has been rather hollowed out and needs investment (while Colombian travellers were revelling in the strong currency until 2013, it devastated the exporters from outside the oil sector). A significant recovery without oil is probably some time away.

The US Federal Reserve (The Fed):

Since the US financial crisis, the United States has been printing a lot of dollars (via the Fed’s Quantitative Easing — or QE — programme that you’ve probably heard mentioned on the news). The Fed has also kept interest rates at 0% to encourage people to spend, rather than save, their money. These policies, designed to lift the faltering US economy, mean lots of dollars to go round and a consequently weaker dollar (one of the causes for the peso being stronger than ever until 2013). When the Fed started talking about gradually ending QE in May 2013, the dollar began to strengthen. The US economy is now recovering and QE is over, taking us to the next stage: the Fed will soon raise interest rates — possibly as early as September. Higher interest rates will make the US a more attractive place for investment and could lift the dollar, thus weakening the Colombian peso.

(Tip for European expats: any rate rises from the Bank of England or European Central Bank are likely to come later. The pound and euro may therefore also weaken versus the dollar, meaning the peso stays roughly stable to these currencies.)

Bad news for foreign peso-earners: many analysts think Finance Minister Mauricio Cárdenas is still delighted at the slump in the peso. When the currency was strong, he claimed it was the economy’s biggest handicap as it was so damaging to exporters. Whether he was expecting a loss of more than a third of its value is not clear, but he certainly has more urgent priorities than the currency.

Cárdenas has a place on the board of BanRep, Colombia’s central bank, which has the capacity to directly affect the value of the peso: either via a rate adjustment or by making an “intervention” and buying pesos with its dollar reserves. BanRep’s mandate is not to directly manage the currency, but to control inflation. A weaker currency, however, means more expensive imports and therefore an increase in prices: inflation. So far, the central bank has avoided spending dollar reserves, which it worked so hard to acquire, on supporting the currency, and it seems unlikely it will change its policy now. It could raise interest rates, however, which would combat inflation and support the peso.

The issue facing BanRep is that Colombia’s economic growth is slowing down, and an interest rate increase would hinder rather than help the economy. BanRep’s board has voted to keep the base rate at 4.5% for 11 straight months up to July, but at the last meeting the decision was — for the first time in a year — not unanimous. This suggests the board is leaning towards interest rate rises that could help the peso.

Something of a wildcard that could produce a small rally in the currency. Deputy finance minister Andrés Escobar said in July that Colombia may reduce the taxes foreign investors have to pay on profits they make on the country’s bonds. A previous tax cut in January 2013 helped an increase in foreign holdings of the Colombian bonds from 3.7% at the end of 2012 to around 16% today. You’ve guessed it: more foreigners buying Colombian bonds equates to more foreigners buying pesos, and a lift for the currency.