Home English grammar Reporting for duty: How to write reports in English

It’s early on Monday morning and you’ve just arrived at the office. Your boss throws a load of graphs and charts onto your desk and tells you that you’ve got an hour to get that report together. It’s time to study the data, extract the relevant points, and write up a report. Are you up to the job?

Writing a report is straightforward when you follow a few simple rules. The information in this article is specifically aimed at the sort of report you’ll need to write for exams like the IELTS, but will also help you with most other types of report-writing. The key idea is to transfer the information in the picture into words.

Take in the big picture

Take some time to look at the basic information. Even if you’re under exam conditions, it’s important that you get a good understanding of the data first. How is it presented? What does it show? Is the information changing over time? Can you see any trends? Also notice what units are used: if the graphics are talking about money, then is this dollars, pounds or pesos? If they’re describing monuments, for example, then 18” are very different from 18’!

Give a general view

Your first one-sentence paragraph needs to give a quick summary of the information. The people reading your report probably don’t have a lot of time to spare, so they need to know immediately what they’re reading. Something simple, like “The graph shows the number of pet owners in Colombia during the years 2010 to 2015.” Don’t make it too complicated: there will be space to fill in the details later.

Focus on the facts

Next, ask yourself what’s important about this information. When you look at it, what is most obvious? What’s significant about it? Your first proper paragraph should focus on this. A good report is not a list of every possible detail, but a guide to the most significant aspects. It’s good at this point to state the specific statistics to make everything as clear as possible for your reader. Remember, the idea is to make your report so clear that the reader can get all the necessary information without even needing to check the original data. For example: “It is immediately apparent that dogs are the most popular pets in Colombia, and that their popularity rose significantly during the years in question. This figure climbed from 46% of households having a dog in 2010, to 58% in 2015.” When you use the second paragraph to highlight the most important features, it guides your reader to immediately identify the most significant information.

Fill in the gaps

In your third paragraph, you have the chance to pick up on other interesting aspects of the information. After you’ve presented the most important feature in paragraph two, paragraph three is where you can point out other bits and pieces that you think are significant or of particular interest to your reader: “On the other hand, the popularity of cats has dropped slightly during this period. The move from 44% cat ownership to 38% represents a definite downward trend. The fact that hamster ownership has stayed at a constant 10% during the sample period shows that while this pet is much less popular than dogs and cats, it is an option for a considerable number of Colombians.”

Round it all off

Your final paragraph is your chance to pull everything together and give your final conclusions. This is where you give your opinion and recommendations, based on the information you’ve already given in the previous paragraphs. This is not the place to mention new details: it is where you take things you’ve already mentioned, and use them to give a reasoned opinion. Some repetition of your previous points here is acceptable. So, if you’ve been asked to give recommendations to a national chain of pet stores: “As the popularity of dogs as pets in Colombian households continues to rise, food and accessories for dogs will continue to be a lucrative area for investment. However, it could be wise to cut back slightly on cat-related products as their popularity has dropped a little. The low but steady popularity of hamsters as pets means that although they should not be invested in heavily, it’s worthwhile to continue to cater to this market.”

Also remember that reports are usually semi-formal, so avoid using casual language and contractions. Once you’ve mastered this basic structure, your reports will certainly be something to write home about!

Look at the bar chart below and try writing your own report for it (about 150 words). Then check with our report at the bottom of the page. 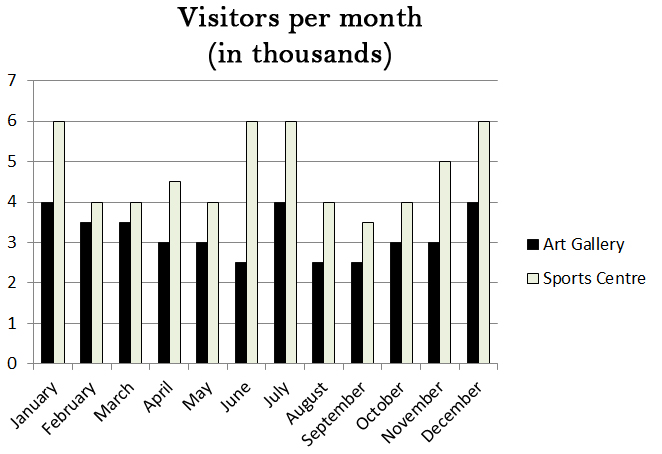 This bar chart shows us how many people visited the art gallery and sports centre during a twelve-month period.

The art gallery is usually most popular during the winter, although it also saw a spike in visitors in July. Meanwhile, the sports centre is particularly popular during two periods: June-July and December-January.

From this information, we can see that the number of visitors for both locations fluctuates throughout the year, but that the sports centre is more popular.

Originally from Sheffield, England, Phil Stoneman has been teaching English in Colombia since 2004. He likes to write reports and develop the right rapport.