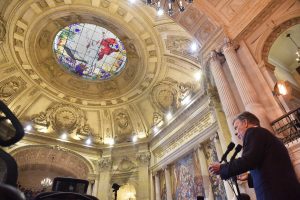 The first Colombian to receive the Nobel Peace Prize for his efforts in forming a peace accord with the FARC, President Juan Manuel Santos is to leave office with low approval ratings. His presidency ends with a populace divided on his legacy. But as time goes on, how will history remember Juan Manuel Santos?

In a televised interview conducted by Juan Manuel Santos, the young journalist for El Tiempo asked liberal politician Luis Carlos Galán–within the context of President Barco’s decision to make peace with the M-19–whether Colombia is better off now than it was before.

If the same question were asked of President Santos today, two answers would be given that indicate how divided opinion is of Santos as he leaves office today when President Iván Duque assumes the mantle of power.

On the one hand, his supporters would point to Santos’ crowning achievement in making peace with the FARC and ending the world’s longest conflict that ended with the deaths of 260,000, according to recent estimates by the National Center for Historical Memory, and a further 7 million displaced by the war.

In disarming the FARC, Santos had done what his predecessors had not. More so, he did it against a popular mandate at great risk to his political future. In addition to this, as his detractors argue, the peace accord is an imperfect agreement; one that has failed to counter the rise of dissident groups, the growing numbers of killed social leaders, the decrease in safety and security of civilians and the fact that Colombia now produces more cocaine than at any point in its history.

Colombia has seen this before. In 1989, President Barco brought the M-19 into the political fold and the economy collapsed a decade later. The concern is that by 2026 the same will occur and Santos’ name will forever be attached to the failure.

So given the importance of the peace accord to Santos’ legacy, the one crucial question that will determine whether history will remember him fondly is whether the peace accord– and by extension peace–can endure.

That question will initially have to be answered by President Duque, who has spoken out strongly against the impunity offered to former combatants under the peace accord.

One analogy from recent history may be in viewing the peace accord much like former US President Barack Obama’s healthcare legislation known as “Obamacare”. Although a peace following five decades is more monumental than the organisation of healthcare, the two achievements were both seen as unlikely to occur in the decades that preceded it.

Obamacare eventually passed with low approval that was neither accepted by liberals (who had wanted universal healthcare) nor conservatives (who wanted greater competition between insurance companies). After President Trump took office, however, he faced great difficulty in forming an alternative plan that could win support in the Senate. Similarly, in Colombia the alternatives are unthinkable and Santos’ peace accord may continue to find enough support within the legislature to have it stay intact, thus preserving the peace accord.

“The ink may not yet have dried on Santos’ legacy. But in securing the peace accord that disarmed one of Latin America’s largest rebel groups much of the blood has.”

In the coming years, it will become clearer as to what extent the peace accord can be built upon and how it could perhaps serve as a template for other ongoing conflicts like that with the ELN.

El Tiempo columnist Fernando Posada ended his most recent column like this: “It is a prudent decision by President Santos to say goodbye to politics having secured one of the most important achievements of recent decades in the country: the disarmament of the largest and longest lasting guerrilla movements on the continent.”

Duque, who is known for his calm and composed manner, is likely in this regard to take more from his predecessor than he is from his political mentor former President Álvaro Uribe. Given his decision to step away from politics, Santos also is likely to concede Duque some space in which to govern without trading barbs in public, knowing full well that his place in history will owe much to what Duque can effect while in power.

The ink may not yet have dried on Santos’ legacy. But in securing the peace accord that disarmed one of Latin America’s largest rebel groups much of the blood has. Whether the healing process continues has now landed in the hands of his successors.