Persecution, poetry, philosophy, and pussy riots were among the themes that set Cartagena buzzing during this year’s Hay Festival. If you weren’t able to go, it’s not too late to get your dose of culture.

For four days in January, the Hay Festival in Cartagena drew authors, artists and members of the public to theatres, lecture halls, cafes and restaurants which buzzed with debates about literature and the arts as well as pressing political and cultural issues.

More than a hundred names, both heavyweights and lightweights, were present at this year’s festival. Some dazzled and entertained; some failed to live up to expectations.

Here are some of the highlights.

The author, who is probably Colombia’s leading novelist and certainly the most prominent internationally, thanks to best sellers such as The Sound of Things Falling and The Secret History of Costaguana, presented his new collection of essays, Viajes con un mapa en blanco (Travels with a blank map).

This new collection highlights some of the works and authors that have inspired Vásquez, and can be broken down into three sections: Don Quijote (Vásquez says that the English understood him before the Spanish ever did); the Latin American tradition; and Vásquez’s personal favourites, including Conrad, Joyce, Proust and Tolstoy.

Highlighting the Latin American tradition, more frequently called the ‘Latin American boom’ of the 60s, whose objective was “to contradict the official version of events,” he says that artists and novelists have always been dangerous. Like Rushdie, they have been persecuted, and many have gone to jail.

And writing, according to Vásquez, is one of the hardest professions in the world. Nothing guarantees success, not even publication. And one of the greatest threats today is electronic publishing, where free illegal distribution is even easier. Vásquez is pleased that the printed book is making a comeback, even if in countries like Colombia there are more pirated copies of most bestsellers than legal ones.

Vásquez’s own books have almost always been linked to historical events, such as the Panama Canal, the Bogotazo or the bombing of an Avianca plane. But he stresses that the novelist is no historian: the novelist has no duty, “the only need is to write well.” And that he certainly does.

Recommendation: In English, The Sound of Things Falling and The Secret History of Costaguana, and soon The Shape of the Ruins. In Spanish, the new collection of essays, Viajes con un mapa en blanco. Indeed, for any lover of literature, his list of authors could be one of the best reading lists you’ll ever read.

“The novel is the intersection between the writer’s internal conversation with himself and his external conversation with the outside world,” says Rushdie, one of the two Nobel Prize winners at this year’s Hay. His interview with Juan Gabriel Vásquez touched on One Hundred Years of Solitude  – both authors have been inspired by Gabriel García Marquéz – and Rushdie’s masterpiece, Midnight’s Children, before focusing on the autobiographical Joseph Anton, which tells of the author’s persecution after the publication of The Satanic Verses. They also talked about his latest novel The Golden House, based on the last US presidential elections, a book which predicted a surprise win from a Republican outsider.

Recommendation: Get the new novel The Golden House, but read Midnight’s Children first if you can.

This documentary film, directed by the Colombian, Miguel Salazar, had its premiere at Cartagena, before its national release in February. The documentary is an original and powerful approach to interpreting the Colombian conflict, from the point of view of Ciro, victim of some of the conflict’s worst atrocities, from all of its players.

The audience at the Hay had the chance to meet and talk to the director, the production team and the film’s protagonists after the showing, and the overall experience had everyone in tears.

Felisa Jiménez was at the talk and said, “Ciro y Yo is a documentary that is so vital and honest, that at the end we were all gutted, in floods of tears. This is what we call an urgent film, one that’s necessary for the country. Although it’s not nice to say that any future spectator of the film will be completely overwhelmed by the suffering and chaos that the war causes for those who are really on the front line, no other film has been made that leaves the disorder of war so clear.”

Recommendation: See the film as soon as you can, ideally on the big screen.

The Spanish philosopher Javier Gomá argues that philosophy should be about the world, and for everyone in it, saying “It should not be just for philosophers.”

His new book La imagen de tu vida (The Image of Your Life)expresses the need to give dignity to your life, “to live your life so that death becomes just.” He talked about two kinds of value, the weighty values (valores de peso), which give more years to your life, and high values (valores de altura), which give our years more life. These high values come from cultural expressions such as the theatre, literature and the Hay Festival itself, and allow us to be “mortal with dignity.”

Alejandro Gaviria: The right to die

Talking of dignity, Colombian Health Minister Alejandro Gaviria’s interview with María Elvira Samper on euthanasia was one of the most powerful and memorable events at the Hay Festival.

Gaviria has tried to introduce legislation that offers the possibility of achieving a dignified death. Alec Russell, FT Weekend editor, commented that Gaviria had one of the most cogent and convincing arguments that he had ever heard.

One audience member, Iliana Quintero, told me: “He was able to give an objective and practical context to death.”

Enrique Serrano is an academic, short story writer and essayist, famous in Colombia for his long essay, ¿Por qué fracasa Colombia? (Why does Colombia fail), in which he argues that this is still an adolescent country – it still isn’t quite sure about its identity and what or who it wants to be when it grows up. He spoke with novelist and historian, Juan Esteban Constaín, about many of the myths that have been and are still taught in Colombia regarding the Spanish colonial period.

Recommendation: Read ¿Por qué fracasa Colombia? Serrano has a clear and sharp voice for those who are living in Colombia and want to understand more about the country. It’s also worth reading David Bushnell’s The Making of Modern Colombia: A Nation in Spite of Itself.

Memorable stories, the art of the short story

Four winners of the prestigious Gabriel García Marquéz prize for short fiction in Hispanoamerica gave a talk called ’Memorable stories’ which looked at the genre of short stories – which have been given something of a renaissance by the internet and podcasts.

Clara Irene Reyes, who was in the audience, said they gave some great tips on how to write a good short story, such as: “If something is art, you don’t notice the threads,” and “there should be no saturation or lyrical excesses – when it comes to language, everything has to be measured.”

Guillermo Arriaga became famous as a scriptwriter for the films Amores Perros, 21 gramos and Babel.

Recently he has returned to literature, which may pay less, but which can provide much more independence and satisfaction.

Felisa Jiménez heard his talk and was impressed by his charisma and the way he spoke from his own experience. She told me that he described the absolute freedom that the novelist has to propose his rhythm, and to form a permanent and intimate connection with the reader.

Talking about his new novel El salvaje, he said that “to reach a deep sense of life you have to understand death,” one of the themes of the book.

A great example of the festival going beyond literature, poetry and music to other contemporary issues saw Guardian journalist Luke Harding interviewing Nadya Tolokno, from the Russian punk group Pussy Riot. Imprisoned for two years by Putin’s government in 2012, Tolokno is an example of the heroic defence of the freedom of expression and defiance against authoritarian regimes.

She currently continues her activism from the relative calm of Canada.

Recommendation: Interviews and articles with the group and the book, Pussy Riot: How to Start a Revolution. She has a new book out later this year.

Amazona is a documentary presented by its director Clare Weiskopf, and revolves around the director’s mother, Val, asking questions such as, What makes a good mother? Do you have to give up your dreams, no matter how extreme, when you have children?

To watch this film in the presence of its director was an amazing experience.

Christina Dale, who was there, told me: “I thought that the relationship between mothers and daughters was an unknown for the masculine spectator, I thought that it was something that was impossible to relate, to tell honestly and in detail about the special connection a woman has with her own mother. I was wrong.”

She continued, “Clare Weiskopf uses the documentary as a medium to tell the story of her mother, Val, and at the same time lets the public get involved intimately with the film, reliving their own experiences, all in a very short space of time.”

Recommendation: Watch the film – in a cinema, online, DVD, wherever you can. 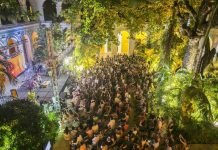 Discoveries and inspiration at the Hay Festival