Home Bogotá In praise of the humble Colombian tienda

For some, the tienda experience may have been overshadowed by a plethora of posh bars serving craft beer and draft beer, but don’t knock their cheap beer and great atmosphere.

It is somewhat of a common occurrence in the life of a drinker to search for a suitable boozing shed that affords him or her the luxury of both comfort and fair prices. Drinking, as we all know, can gradually thin the wallet, and unless you’re firmly anchored in the upper echelons of society, careful consideration must be given to this issue.

Enter the tienda. Safe havens for rapacious beer-chuggers who relentlessly strive for empyrean at a mere $2,500 a bottle. Any more than $3,500 for a Club and you’re in the wrong place. What’s more, beers are left on the table to keep track of how many you’ve had, so by the end you’ll be surrounded by the empties that are a testament to your good form and insatiable appetite. By the end of the night drinking groups will have gathered whole crates (or petacos) of empty beer bottles under their tables.

Monetary concerns aside, tienda drinking is a classic Colombian experience. You’ll encounter all types at any one time, from the couple having a few after their romantic dinner to a group of boisterous lads steaming through several crates, to the old boys who sit there for hours, remaining serene and composed no matter how much they consume.

Tiendas are for no-nonsense drinkers. If you’re the sort of scoundrel whose idea of drinking is a series of complicated cocktails in an overpriced bar that insists on playing monotonous tin-pan music, good luck and good riddance. More often than not, these bars are filled with supercilious ignoramuses, who put on an air of infuriating self-importance as they order an over-the-top drink and snap a photo of it. Worse still, quite a few of these places have taken to serving their beverages in jars, a quite awful trend that must be done away with.

The beauty of a tienda lies in its simplicity, and it goes without saying that the choice of beverage is not just limited to beer. Its primary purpose, after all, is that of a shop, and if it is the sort of night which requires you to do a little more than just cruise in second gear, everything from that ambrosial goodness of Aguardiente to rank Tequila can be ordered and consumed in whichever way one sees fit. The ranker the better, because, and this I must stress, a night at a tienda should not be a classy affair. Rather, to borrow a phrase from Sir Kingsley Amis it necessitates a dipsographic debauch.

I mentioned it above, but the question of music is of such importance that it needs its own section. Most of us can only dream of what must have been those halcyon years of drinking in establishments that had the good grace to refrain from playing music of any kind, instead letting you get on with what you originally went there to do. Nowadays, music is inescapable, and possesses the ability to ruin your evening if it is out of place, too loud or just plain bad. Or bland, as is the case with BBC pubs. A friend remarked recently as we sat in there one evening, that their music seems to be a playlist of songs we listened to in our pre-pubescence. In other words, the musical equivalent of an arepa. It is quite a shame indeed, as apart from that BBCs are a solid bet with their wide range of craft beer served it in the sacred pint glass.

Related: things to do in Bogotá

Tiendas, in general, do not make the same mistake. In fact, the music is often part of the fun. Should you parlay with the regulars you might find there’s a subtlety to tiendas that may have escaped your notice – some attract salsa fanatics, some are home to the vallenato fans and some are where the rockers hang out at the start (or end) of their nights. With juke boxes on the walls and raunchy videos that often have no connection to the music being played, the tunes can jump from Willie Colón straight to Rage Against the Machine and become a part of the shared joy – or frustration – of the clientele. Bizarre, but far superior to a bland Spotify playlist.

The final point to be made in favour of tiendas is consistency. No matter where you are in the city, there’ll be one right around the corner and they all do the same job, namely cheap booze and a cheerey, genuine atmosphere, whatever that atmosphere may be. Remember to keep that in mind the next time someone you know suggests a fancy-pants bar where you struggle through the rigmarole of ordering a drink as the vacuous ambience surrounds you like a big soggy flannel 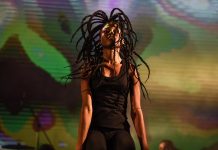 FITB: The Best of Colombia in theatre