On October 30, an indigenous protest took place as communities across the country took to the streets to demonstrate against the killings of social activists and demand that the government comply with the ethnic chapter of the peace agreement and other promises made to protect indigenous land rights.

Since the protest, at least eight people have been injured in clashes with police as they tried to break up roadblocks of major trade routes in Cauca and Valle del Cauca.

Vásquez was covering a confrontation between indigenous people and the ESMAD when the mother of three was shot and later died from the wounds while being transported to the hospital. Police claim they were not armed with live ammunition and that Vásquez must have been killed by the indigenous people.

Meanwhile, her community of Kokonuko has presented video tapes which clearly show shots being fired from the ESMAD. The situation is somewhat reminiscent of the clashes with security forces in Tumaco at the beginning of the month, where police attributed the death of eight coca farmers to a group of FARC dissidents.

In the wake of these events, the community of Kokonuko arranged a public hearing, during which indigenous leaders addressed the local and national authorities that had been invited but failed to attend. The community demanded that the Minister of Foreign Affairs order the “immediate retreat of the ESMAD, the police and the army from the area”. Indigenous people have stressed that the presence of the public force in Kokonuko undermines their statutory right to a local government and the protection of their territory.

In 2013, the government signed an agreement with many indigenous communities, including Kokonuko, promising to buy out all private property in their territory, but it has yet to fulfil its obligations. In addition, people called on the national authorities to guarantee the security of protesters, which they failed to do during mobilisations in 2013, where more than ten people were killed, and hundreds injured.

Although the Prosecutor’s office stated that it had started an investigation into the Vásquez case, hopes for a speedy process are slim. Judicial proceedings on the killings of social leaders have been highly inefficient, and only four of 74 cases have led to court sentences between March 2016 and March 2017, according to the daily El Tiempo.

Revista Semana reports that more than eighty social leaders have been killed this year, and indigenous leaders are especially vulnerable. Ahead of the indigenous mobilisation neo-paramilitary groups had sent out pamphlets with death threats against indigenous leaders. Furthermore, ethnic communities have felt forgotten and left out from the peace process.

Aida Quilcué, a representative of the human rights programme of ONIC fiercely criticised the authorities. “The Santos government received the Nobel Peace Prize, but how are they treating us? With rifles, with weapons, attacking us with all their force. As indigenous peoples, we have politics. We speak up. We have a strong organisation. But we cannot survive next to the force of the government. This cannot be a peace process”.

The national government has responded by setting up a negotiating table with indigenous communities, but protests are likely to continue until the demands relating to the 2013 agreement are met by the government.

Marianne and Elise belong to The Norwegian Solidarity Committee for Latin America (LAG), which works to spread information on the social, economic and political situation in Latin America. LAG supports social movements’ struggle against military oppression and abuse of human rights. In Colombia, LAG works with farmers, indigenous and afro-descendent people, focusing on issues related to the implementation of the peace agreement, criminalisation of social protest and land consolidation. 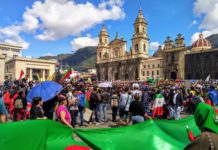