Home Latest It’s in the bag 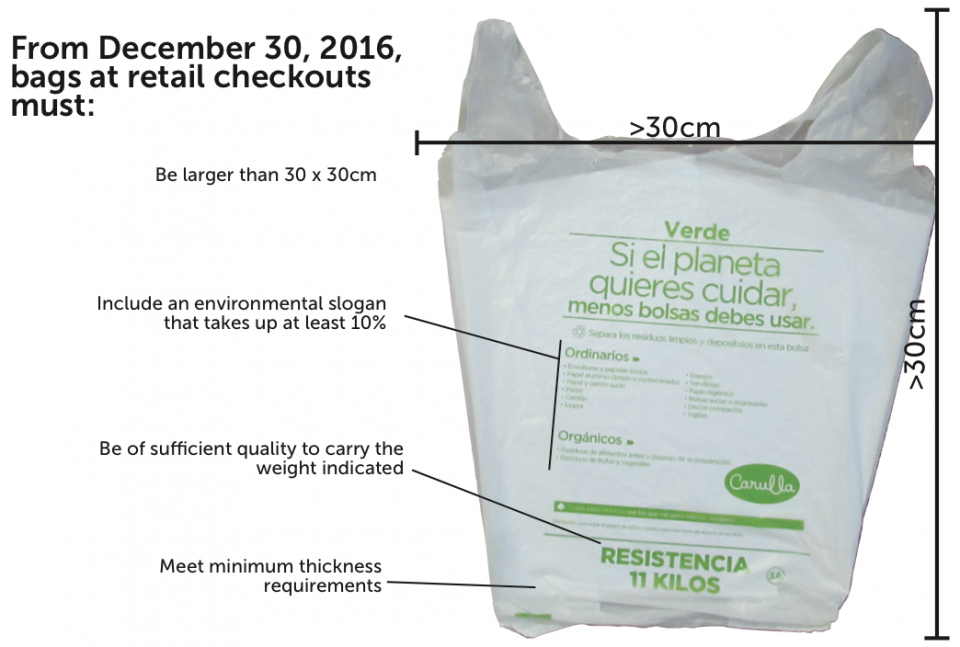 Sandra Howard, Deputy Minister of Commerce: ‘Bags do not grow on trees or in rivers’

Colombia is taking its first steps towards regulating the use of plastic bags. A new resolution will ban the use of non-reusable bags smaller than 30 x 30cm at checkouts and require larger bags to meet minimum thickness requirements and feature an environmental message.

The legislation, which will come into force at the end of this year, also obliges retailers to reduce bag usage by 10% in 2017 and a further 5% every subsequent year until a 60% reduction is reached. Shops can opt out of the programme by charging customers for bags.

In addition to changes in the law, April 29 saw the first of three nationwide awareness days called ‘ReemBÓLSAle al Planeta’. This campaign is supported by major retailers, the union of plastic manufacturers and the WWF. It seeks to promote a more responsible use of plastic bags and will be repeated in July and October.

People were encouraged to re-cycle and re-use bags at supermarkets throughout the country, as well as registering on soyecolombiano.com for the chance to win a trip in a submarine.

According to the environment ministry, the average Colombian uses 288 bags per year (about six a week), which comes to about 22,000 bags in a lifetime.

“Bags do not grow on trees or in rivers”, Sandra Howard, Deputy Minister of Commerce, Industry and Tourism, told the event launch in Salitre Plaza. She added “We are proud to say that Colombia is one of the most biodiverse countries, yet we ask for bags to pack one tomato, one plantain. It is absurd, let’s think twice before asking for bags.”

It is the sheer volume of bags, combined with their long life, that cause such significant environmental damage. According to the campaign, two million plastic bags are used worldwide every minute. Each bag is used for an average of 12 minutes, and only 5% are recycled.

The rest will take hundreds of years to degrade. A large percentage end up in the sea, where they kill marine life and damage the flora and fauna. At this rate, by 2050 there will be more plastic in the sea than fish.

Colombia joins many countries around the world in legislating to restrict lightweight plastic bag use. Bangladesh was one of the first to introduce an outright ban in 2002, after the bags had been connected to severe flooding in the country. South Africa, Bhutan, Tanzania and Mongolia have followed suit.

Many European countries such as Ireland, Belgium, Denmark, Finland, Germany and the United Kingdom have introduced compulsory charges or fees on plastic bags. Ireland’s PlasTax, introduced in 2002, resulted in an over 90% decrease in consumption – from 328 to 21 bags per consumer per year.

Tres Bastardos: “A kingdom without a king”