July 1 will see the streets of Bogotá filled with rainbow flags and banners as the city’s LGBTQ community march in the city’s annual pride parade.

It’s that time of the year again when the biggest wigs, the tallest heels and the most colourful costumes grace Bogota’s streets − it’s gay pride.

The 2018 Bogotá gay pride parade will take place on July 1st and will mark the 23rd year of Bogota’s Lesbian, Gay, Bisexual, Trans and Queer (LGBTQ) march in the city.

“It is really important that LGBTQ people and social organisations keep fighting for our rights,” Juan Carlos Prieto, Director of Sexual Diversity of the Bogotá Mayor’s Office, told The Bogotá Post.

The slogan for this year’s celebration is “Difference Unites Us” and the march will begin from Bogotá’s Parque Nacional (Calle 35 #7) at around 12.30pm where people will parade on floats and in costume. It will end in Plaza Bolívar in the city centre, where the party will continue with live music.

“In Colombia, people are still discriminated against for their sexual orientation. Many LGBTQ people have felt discriminated at some point in their life, so we need to keep fighting for equality, respect and sexual diversity so that we are considered as first-class citizens by everyone,” Prieto said.

“We want all citizens, people from different social sectors, to come and join in.”

This article first appeared in Edition 55 of The Bogotá Post. 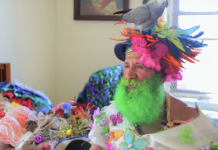