The audience will be thrown to the wolves in Lobos, a chilling original play by the Compañía Nacional de la Artes. We catch up with director Mark Maughan as the group get ready for their first performance. 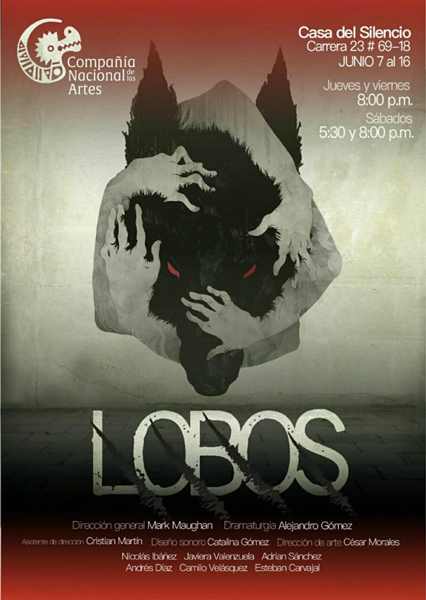 Lobos, which opens on Thursday, June 7 and runs until June 16, has been in the works for over a year and is the result of a collaboration between UK director Mark Maughan and Colombian playwright Alejandro Gómez.

This new production by the Compañía Nacional de las Artes is an original play that was adapted by Gómez from Robert Musil’s novel The Confusions of Young Törless.

Maughan tells us that it’s essentially “a coming-of-age story.” He continues, “It’s young boys, locked up in school, getting to know one another and themselves within that environment. It’s about a friendship group that slowly but surely degrades because of the arrival of a new pupil to the school.”

It’s not very often you come across a Brit trying to direct a play adapted by a Colombian from a German novel about a boys’ boarding school. But luckily, Mark is no stranger to Colombia. He has enjoyed the process of cross-country preparation – including readings via WhatsApp – that began when the pair met at a workshop organised by ASAB, the Academia Superior de Artes de Bogotá.

The director explains that they spent quite a lot of time talking about why the novel is relevant to Colombia, even though there are not many boarding schools here. Describing the play as “visceral”, it is clear from our conversation that there are several themes – such as growing up, memory and elitism that will all resonate with audiences.

In Maughan’s words, it’s partly about what an elite mentality does to people, “When you are surrounded by an environment that tells you, ‘You will be the bright young minds of the future’ – what that does to young boys. It’s about the upper echelons and what that sort of breeding and that sort of education does to people. What’s repressed, what’s allowed, what happens in that scenario.”

Broad themes aside, Maughan says that this is “a relationship-led piece.” He says that his style as a director is to draw out the characters and work at a very human level.

Set in the 80s, Lobos focuses on a man, Gabriel, who returns to the boarding school he attended as a boy, and must face all the painful memories associated with that time. The plot jumps between memories, using ingenious lighting to move the action between various ‘sets’ all on the same stage.

So what can the audience expect? According to Maughan, “A reminder of what it’s like to be young again, and how everything means so much more.” He adds, “But also the piece itself is a jigsaw puzzle that an audience member puts together by watching the scenes.” The audience are at times directly addressed by the cast, and although Maughan points out that “you’re not expected to interact with the cast, you will be addressed and told the story.”

Now in its final days of preparation, Maughan can smile as he looks back on the challenges that the cast and crew have faced along the way. He jokingly calls it “a bit of a beast to wrestle” explaining that he and Gómez have had to put in serious work to balance the staccato, liminal nature of the plot with narration and storytelling that allow the audience to easily grasp what’s going on.

“We’re trying our best right now to establish the rhythm,” says Maughan, “it’s about nailing the tone of each memory.” The London-based director has also had to adjust to Colombian rehearsal schedules; most actors here work on multiple productions at the same time, shifting rehearsal times between morning and night sessions, in comparison to what Maughan calls “the normal eleven-to-six-with-tea-breaks” style of British productions. The cast have found their rhythm however, and now it’s just a case of the last few tweaks before the lights come up on opening night.

Lobos is being performed at the Casa del Silencio on Carrera 23 #69-18 from June 7-16. Performances on Thursday, Friday and Saturday start at 8pm with a 5.30pm matinee on Saturdays too.

FITB: Theatre on the international stage