There was an eerie calm in downtown Bogotá this morning as people and traffic stayed away to avoid the capital’s persistent student protesters who had planned their biggest march yet to demand more funds for public education.

But not calm for long. As usual the march started with a carnival atmosphere, bright banners, musicians, drums, acrobats, stilt-walkers, a large police escort and human rights observers.

On this their seventh ‘Take the City’ march in as many weeks, the mobilisation was supported by trade unions, social organisations, farmers and indigenous groups – also protesting the government’s tax proposals.

More than 4,000 Bogotá students massed at the Universidad Nacional – the traditional start point for protests – and were also joined by hundreds more from the cities around Colombia. Some had walked to the capital to have their voices heard. Meanwhile trade unions and social organisations took alternative routes to converge on Plaza Simon Bolívar in the city centre.

The marches initially passed off peacefully but soured at mid-day when ESMAD riot police blocked Calle 80 and Avenida 68 causing some violent clashes with hooded protesters who appeared to have infiltrated the student ranks. After an hour of tranquillity was restored and the marchers allowed to continue their planned route.

According to Bogota Post contributors who accompanied the main student march, the ambience was peaceful and celebratory. Heavy rain failed to dampen the spirits of the protestors as they arrived at their destination in Calle 80. Many passing cars where signalling their support.

At 5pm police started attempts to disperse the students with tear gas and stun grenades. 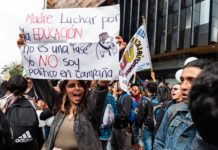 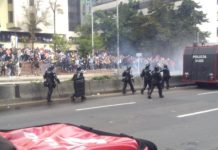 Protests: A week of tear gas and transport woes 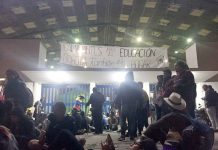 Students trek to the capital and camp out before protests