Comuna 13 beckons tourists and visitors – with music and dance on every corner, walls covered in street art, and brightly-painted escalators – Medellín’s miracle barrio, bursting with the story of transformation from violence to civic pride.

This neighbourhood (along with its myriad tours, books, and merchandise) fits the wider mythology of Medellín’s transformative urban policy: declared in the international press as a ‘smart city’, a global innovator, an eco-city, as the centre of revolutionary urban policy.

And there’s no doubt that Medellín has seen transformations from a global homicide capital – with a huge drops in crime and homicide rates, replaced by thriving tourism, coworking spaces, digital nomads, and vegan sushi.

But if you glance up at the steep slopes above the city centre, into the outskirts of the city, there are different stories to be told, messier stories which don’t fit the neat narrative of the “post-narco” city which local government are ever-keen to tell.

“Is Comuna 13 the rule? Or the exception? To understand how people live in this city, we need to go further, look deeper than popular tourist attractions and government propaganda – and listen harder to its residents – much harder,” says Manuel Oberlader, director of a new exhibition which has sought to create space for new voices and new stories from the peripheries of the city, and bring them right to the centre of Medellín – to Parque de las Luces and the EPM Library.

Many areas still lack infrastructure and even drinkable water

The terracotta-clad slopes stare directly down onto the skyscrapers and government offices of Medellín. But, the periphery lies, in many ways, far from the centre. Gaps in infrastructure, services, and security persist, with acute consequences for the residents of many barrios.

Many of these neighbourhoods were not planned. More than a hundred of Medellín’s barrios are still considered to be informal settlements, built by arriving communities of displaced people – many from Colombia’s civil conflict. Homes and infrastructure were built without state intervention, in community building groups, with money from religious or even criminal organisations.

These neighbourhoods continue to see arrivals from all over the country, as violence continues to rage both in the rural and urban areas, and from Venezuela too.

Public services often had to be hijacked or pirated, and later companies arrived to formalise (and profit from) the usage. Bit by bit, some neighbourhoods were formalised, with services arriving, and even some government presence, though community government structures remain influential.

Many continue, however, with entirely informal infrastructure – lacking resources and state presence. The state presence which these barrios are subject to is often simply the ESMAD riot police attempting to evict residents from informal settlements – still known as ‘invasions’ – even during pandemic.

Mobility matters and the fetish of Medellín’s metro

The mayorship of Sergio Fajardo (now a presidential hopeful for 2022), and his ‘social urbanism’ policy brought huge strides in mobility – including Comuna 13’s escalators. This saved residents huge walking time on their commutes – including from Santo Domingo – once considered one of the most dangerous parts of the city.

One of the most eye catching elements of the ContraMiradas exhibition is simply shoes laid in a display case, telling the stories of “patiamarillos” – ‘yellow shoes’ –-  a name given to residents of barrios due to the staining of their shoes, having to walk down long unpaved roads to reach bus stops or cable car stations.

People often change shoes when they reach the metro – and it has been good business to create ‘guardazapatos’ to look after people’s dirty shoes, so they wouldn’t have to carry their patiamarillos with them – often a cause of shame or stigma associated with being from a barrio of Medellín’s outskirts.

Connection to the centre via a metro station, undoubtedly, makes life, commuting, finding work much easier for residents of the barrios on the steep slopes of the city. What also came with Medellín’s metro and metrocable was pride – it’s Colombia’s first metro system. It’s incredibly clean, efficient, and well-staffed, and many of the stations double as museum spaces, libraries, or music venues.

But there’s danger of the Metro having become somewhat fetishised for paisas (people from Antioquia) – strong pride and public focus on this one urban achievement blinds citizens and governments to the huge amount left to do.

The spectre of gentrification also stalks the arrival of metro stations, with some lifelong residents priced out of their own neighbourhoods.

“Infrastructural development cannot become just another driver of displacement,” says Simon Palacio, an anthropologist, who has been investigating life and infrastructure in Medellín’s barrios for ContraMiradas.

“Urban intervention policies must be integral and holistic, and should take into account the perspectives of individuals and community organisations that operate in the neighbourhoods – they are the ones who can formulate tools and actions – they understand the issues first hand.”

Flashy solutions and tech-heavy innovation are not what’s needed for many on the outskirts of Medellín. They demand grinding, detailed, focused, and sustained attention.

The Biblioteca España is a looming symbol – one of Colombia’s great ‘white elephants’: a huge public space built alongside the Santo Domingo metrocable station. It’s a vast structure visible to half the valley – then hailed as a modernist masterpiece and a revolutionary approach to public space, now abandoned on the mountainside, veiled in black fabric. The project has spent years embroiled in various legal cases trying to assign blame to its structural failures and grand claims of future renovation.

“Community solutions are in place, as has always been the case here, but that doesn’t change the fact that the responsibility lies with the state to ensure that residents enjoy dignified living conditions and basic rights – like water,” says Oberlader.

Leidy Joana Patiño arrived from the countryside of Antioquia, fleeing paramilitary violence against her family, and found shelter in barrio Granizal. But, like all residents, she has to collect drinking water from tanks dotted around the neighbourhood. What arrives in the pipes causes health problems in children – who then have to travel long distances down unpaved roads to reach health services.

“The water is so dirty, it arrives yellow. I use it to wash, but when I first got here, it made my daughter break out in boils,” she told me.

Clean water, health services, lawroads – many of these issues would be facilitated simply by the recognition that people are there and aren’t going anywhere: formalisation of landholding.

The road to recognition – water is a human right

A long legal process finally got the right to clean water recognised in Granizal (technically part of Bello – a part of the urban complex of Medellín’s valley) in 2019, in a legal appeal which recognised not only the state obligation, but that formalisation and regularization of land occupation would facilitate access to basic services.

“These services are not gifts, they are rather of the state to guarantee rights that are constitutionally enshrined. It is no longer ‘do me a favour’, it is no longer thanking officials for what they are doing, but rather it is from an understanding of rights,” said Jaime Agudelo, the lawyer who led the case against the municipality and its public service provider, EPM. This round was an appeal after the former won the initial case on the grounds of ‘logistical impossibility.’

The city is slowly pulling itself out of the coronavirus recession. Poverty rates are spiking and unmet basic needs are rising, and the city’s peripheries are weathering the worst of the economic storm.

As Colombia pats itself on the back for accepting Afghan refugees into the country, it might be time to look closer to home. According to Colombia’s Ombudsman, in the first half of this year, there have been 102 mass displacements in Colombia involving 45,000 victims. City governments might do well to take a more pragmatic approach to their own displaced citizens – or at least listen to them.

The ContraMiradas exhibition is at the EPM Library, Medellín, until the end of October 2021.

Emily Hart is an independent journalist based in Colombia – she’s just launched a weekly news digest: Colombia’s top news stories – curated, digested, and delivered straight to your phone every Monday as a 5-minute audio and text – sign up here for $5 per month! 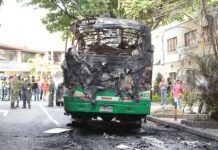 City on Clampdown: Who’s behind the increased violence in Medellín?