The gruelling hike through jungle, páramo and finally ice to reach the top of one of Colombia’s highest peaks, the Nevado del Tolima, is not for the faint-hearted, but well worth it.

I was told that a long time ago a Japanese pilot crashed in the Colombian Andes, high up in the tropical alpine ecosystem known as the páramo. His plane crashed somewhere in the vicinity of the massive volcano Nevado del Tolima, or Dulima, as it was known before the Spaniards. The pilot survived and wandered the mountain highlands for years, perhaps decades, enamoured by the beauty of the páramo, an ecosystem so unique, some say, we don’t even realise how fast it may be evolving.

Some people say the explorer never left and continues wandering, as a spectre in the clouds, mingling with spectacled bears.

These days, you hear a lot about Colombia’s páramos. The altitude and exposure to extreme swings in temperature and weather make them something like enormous islands, floating among seas of tropical jungles. Survival under extreme conditions have resulted in a population of plants finely tuned to shielding high levels of UV rays, trapping and managing water, resisting wind and freezing temperatures.

These distinctive alpine ecosystems play an important role in water conservation and only exist in a small geographical area, sandwiched between the glaciers, permanent snowline and the lush cloud forests below. Páramos are sophisticated sponges of volcanic layered loam that sustain the water cycle at an elevated capacity year round. In fact, over 90% of the water used and consumed in Bogotá originates from Chingaza, east of the city, and other highland water towers are where the Amazon River begins.

I hiked through the páramo spread out around the Nevado del Tolima for four days, on the way to the mountain’s 5,000 metre glaciated peak. I had joined a crew of seasoned hikers and páramo buffs, including a guy from the US who goes by Beto and named his first child ‘Páramo’ – a uniquely unpolished name that pays homage to the delicate ecosystem of a country where Beto has lived for the last 10 years. Beto crossed the Darién Gap on foot in the 90s, a time when Colombia’s ongoing conflict would’ve intimidated most explorers from such feats of derring-do.

Instead of kidnapped or dead, Beto wound up with a rare tropical disease called leishmaniasis, a parasite spread by sandflies that kills over 50,000 people each year. Months later, after travelling the length of the Andes, a Chilean doctor recognised the small skin ulcer on his hand and convinced him to go back to the US. For a short time, he was the poster child for leishmaniasis and a celebrity in the division of tropical diseases at the Centers for Disease Control and Prevention (CDC). Since then, he’s been on a mission to climb every glacier-capped peak in the Colombian Andes.

The rest of our team included Beto’s brother Johnny, who came down from the icy Maine winter to put his sea level lungs to the test with the quick elevation gain — from 2,100 to 5,200 metres. Also from the US, we had Colin and John, aka ‘Juanito’, a recent inductee to the world of high-altitude trekking and suffering. Lastly, no trek would be complete without local representation, and we had Rico, a narcotrafficking expert whom the government pays to tell them how to fix its illegal narcotic industry problems.

Despite the clear benefits of keeping páramos the way they are, the government is at odds with the population of campesinos who have migrated higher and higher due to the intertwined factors of lack of access to land and violence. Today, there are an estimated 300,000 to 400,000 people living in the páramo, dabbling in agriculture and living off ranching. As with other highland dwellers around the world, milk and cheese are the staples. Farmers also grow a major portion of the onions and potatoes consumed in Colombia, activities that uproot native plants and are destroying the fragile ecosystem. To many of these families, the páramos provide economic subsistence so their children can live and go to school in the valleys below.

Under the law, any type of agriculture in the country’s páramos is illegal. Still, one out of 10 hectares is being ploughed, but who has the time and resources to patrol more than 2.5 million hectares of highland? In the Nevado del Tolima National Park, cows outnumber people, and Colombia’s National Park service has maybe five employees, on a good day. The government is currently trying to buy out ranchers living inside the park, but it’s a slow process.

Queen of the páramo

In the face of an atypical pattern of rain clouds for the month of January, we packed mules with everything except what we thought we needed on our person, and set off from Salento, Quindío, through a cooler-than-usual jungle. The path slowly rose before turning into a steep puzzle of slippery steps along muddy ruts, carved out by the combination of rain, mules and humans. We passed Colombian backpackers and day hikers, but none convinced me they were prepared for the weight of a downpour or the precision needed to move up the mire. Trekking poles were more than valuable. At one point, high on the mountain but still in the forest, we passed three exhausted hikers off to the side of the trail, with no poles and overloaded with gear. They said they were turning around, pre-páramo, their hopes caked in mud and sunk like oxen in a bog.

When the forest abruptly ended, we knew we had reached the páramo, where an open prairie of frailejones, bunchgrasses, and cushion plants replaced the layered ecosystems of jungle and forest below. The cushion plants look like giant pillows floating in a marsh and, on a rocky hillside, make a great place to sit. Both these and the frailejones have the unique ability to store large amounts of water and maintain warmer temperatures on the inside, evolution’s solution for protecting the plants’ buds from freezing temperatures.

Related – The spectacular sights of Salento

After a full day’s hike with tired legs, we arrived to La Primavera, a guesthouse located within the boundaries of the Los Nevados National Park. The farm is run by Mabel and her family of mountain men, a pack of dogs, and an energetic six-year-old boy, who is truly a son of the páramo, growing up in this vast diorama of wind, water and survival. At La Primavera, Mabel runs a tight ship. In her kitchen, hikers huddle around a large wood-burning stove while she shuttles them in and out, plating up hearty meals of soup, potatoes, meat, cabbage, rice, arepas and a tall glass of aguapanela. Solar-powered lights stay on until 10.30pm, but only her favourite guides are allowed to sit in the queen’s court, delighting her with the latest news about their tours, the peace process, natural disasters and local gossip.

Mabel’s ascension to Queen of the Páramo is something of a technological coup. The farmstead’s privilege has more to do with the cellphone signal than the aguapanela. Walk down the trail 15 minutes and there is another farmhouse and another herd of cows, but no network. Since guides can’t call beforehand to make reservations, Mabel has unwittingly cornered the market.

The following morning when we woke up, the peak of the Nevado del Tolima was visible across the valley in the early morning light, its glacier a perfectly sculpted scoop of ice cream. We hiked through the páramo up to 4,200 metres, the last stop for the mule train. Here we put everything we needed for the summit on our backs and shared the load up to 4,600 metres, to a picturesque base camp high on the northeastern flank.

Tired from the trek and wanting to be fresh for the following day, we fell asleep to the sound of the wind, a short distance below the ice. At 6am, we stepped on the glacier, spiking our way up in two cordadas, or roped teams, led by the guides. Inspired by the sunrise, we moved swiftly, reaching the summit by 8am and before anyone else that day. There were hugs and high fives as we unfurled a flag, and even the guide coaxed a melody out of a pan flute. For the better part of 30 minutes, a massive break in the clouds revealed the other glacial peaks of Los Nevados in the distance. We stayed there for a while, mesmerised by Volcano Ruiz, whose rising fumarola reminded us all that deep down, beneath the glaciers, the páramos, and our superficial lives, there is fire. And then we set off again to complete the journey back down.

Approach: Hikers can climb Nevado de Tolima from Ibagué or Salento, both routes are long and steep and require a reasonable level of fitness. If not attempting the peak, there are several day hikes from La Primavera through the páramo, including thermal baths and lakes.

December-March is the known as the dry season 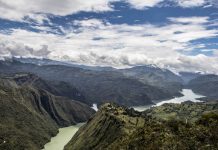 Water route Cundinamarca: water way to have a good time