Home In This Edition News in Brief – November

The UN General Assembly voted overwhelmingly to support the resolution against the American economic embargo of Cuba. 187 of 193 states voted ‘yes’, while Colombia and Ukraine abstained and the US, Israel and Brazil voted ‘no’. According to Reuters, Colombia ́s abstention was a consequence of the chill in relations between the two governments after Havana refused to extradite three ELN-guerrilla commanders when negotiations broke down in January.

On October 25, the Minister of Agriculture, Andrés Valencia, published a resolution that established fishing quotas for various marine species in Colombia. The sharks numbers caused widespread controversy. The resolution authorises the fishing of 125 tons of shark in the Caribbean Sea and 350 tons in the Pacific. Sandra Bessudo, marine biologist and director of Malpelo foundation calls the quotas “too high”, while MarViva, an organisation working towards a sustainable use of marine resources, points out the resolutions risk: “It encourages the fishing of endangered species of sharks and rays; species considered of vital importance for the health of marine ecosystems and therefore for the food security of coastal communities.”

While most Latin American economies are struggling to make headway with growth, a Financial Times report points out that Colombia is on the up. According to the latest numbers from the IMF, the country is still on track for a 3.4% growth for 2019. Furthermore, the IMF only shaved its 2020 forecast for the Colombian GDP by one-tenth of a percentage point making it 3.6 %. That number still would mark the country’s best growth rate since 2014.

February 2 will be a special day for Colombian superstar Shakira: Not just her 43rd birthday, but the National Football League (NFL) also announced that she will be performing at the upcoming Super Bowl halftime show, together with singer and actor Jennifer Lopez. “I think that being at the Super Bowl is very symbolic in a way and I feel we have a great responsibility with the Latinos around the world,” Shakira told news agency Reuters. “There is a lot to celebrate about our Latin culture, and it is a great opportunity to be on this very important stage,” she added. The Super Bowl is the annual final of the NFL and one of the biggest sports events in the world. It will take place in Miami this season. 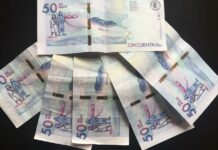