Home Analysis No smoke without fire

As Bogota’s outgoing Environmental Vice-Secretary Julio Pulido was preparing to leave his position, we spoke to him about his work in the department and the issues they face, including black smoke, burning tyres and river regeneration.

Bogota Post: How has it felt to be second-in-command of an institution like the Secretaria Distrital del Ambiente (Environment Department) while all those mobile smoking chimneys are still on the road? Does it make you feel that the institution is impotent?

Julio Pulido: Until recently, dealing with environmental issues was limited to just giving out permits. But under Mayor Gustavo Petro, the environment has become an important factor in making many strategic decisions for the city.

Now regarding those buses with black exhaust fumes, let me give you a few facts:

• What we’ve done in order to improve the quality of air in the capital was to reduce the number of old buses. We’ve also restructured the city fleet operation by introducing the SITP system and consequently removing 4,000 old buses from the roads.

• Furthermore, we’ve implemented the system of hybrid electric taxis and buses (around 200) which is unique in South America.

• Finally, local authorities have become stricter about the technological requirements for Bogota’s bus fleet – having to meet EURO 5 emissions standards and making the use of particulate filters mandatory.

BP: But why does it have to take so long?

Pulido: You can’t change a bus fleet overnight. That’s impossible! The buying process, shipping, sorting out the interiors, negotiating the standards, all of that will take almost four years. I mean you simply can’t get rid of 14,000 buses and replace them immediately. That’s impossible anywhere in the world. Plus, there are contractual issues that may mean your hands are tied for some time.

BP: I do understand that, but not all buses produce that smoke. Why don’t we get rid of the polluting ones?

Pulido: We agreed with the biggest transport companies in Bogota that the change would take place in stages. They have to prove to us a 20 percent reduction of pollution particles 2.5 and 10 each year, on average, from their buses’ exhaust pipes into the atmosphere. We carry out random checks to oversee the process.

And remember the black smoke is only part of the problem: all exhaust gases contain fine particles, ultra-light and heavy, most cannot be seen by the human eye. These particles fly in the air for a long time and can get trapped in the lungs. There are people who think “I do not need a filter for my car, because it doesn’t produce black smoke,” but that is false.

BP: Is that enough? I get the impression that the city’s Environment Department makes some symbolic gestures like setting up green bus stops or introducing hybrid buses on la Septima while we remain surrounded by an ocean of old polluting busetas.

Pulido: I’m proud of those symbols. We’re the first Latin American city to use hybrid buses in public transport. Do you think it was easy to bring them in in the face of the powerful ‘diesel lobby?’ This is ground-breaking change. Wherever you go people associate Bogota with this system, despite all its problems, and I’m happy about that. We’ve also introduced electric taxis and for the first time in the history of this city. We’ve never gone as far as we have now in implementing an electric metro project. It’ll take some time but it’ll happen.

BP: Is there an independent source that can tell us whether the air quality is really improving in Bogota?

Pulido: We’ve invested a lot of money in building a network of air monitoring stations – there are now 13 around the city. The city owns the monitoring network but the management of the data is carried out by an independent company. We are still learning how to use all the data we are getting there. Based on the readings I can give you an example of how things are improving. In terms of particulate matter, the air now is 25 percent better than it was six years ago. It may not be an impressive number but things are getting better.

Our monitoring systems will allow us to predict environmental emergencies and subsequently stop some industries, and implement changes such as permitting what kind of vehicles could be used at particular times.

BP: Why do so many tyres get left in the streets or stored in vast open-air warehouses with poor security like the one in Fontibon that turned into a big fire? 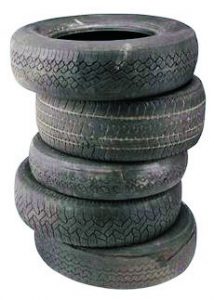 Pulido: We’ve got more or less 1.5 million cars in Bogota. If you multiply that by four tyres per car, it equals 6 million tyres that should be changed, let’s say, every two years. The producers or importers should take responsibility for the waste that is generated by the usage of their products – in this case their tyres.

Otherwise City Hall will have to get involved in recycling everything, from batteries to tyres and mattresses. The problem is also in our culture of consumerism. A Colombian wouldn’t give their used tyres back as they would feel they’re losing something.

People prefer to store them somewhere in their houses and then after some time they realize they are taking up too much space and so they decide to leave them in the street.

As an environmental entity, we organise special events to collect used tyres and then take them back to the producers. Another problem is that apart from taking out the tyre’s wiring, recycling the rubber itself is not an economically viable business for tyre producers/importers. So we’ve got a law but it’s not obeyed.

BP: Has environmental awareness in Colombia increased over the years?

Pulido: Colombian people have always cared about the environment. When we have to cut down a tree we get really vocal environmental activists. We also get phone calls and photos of those horrid busetas spewing black fumes.

My question is what are you willing to do to protect the environment on a daily basis? Would you carry a wrapper in your pocket until you find a rubbish bin instead of throwing it onto the street? Would you buy a cloth bag, or walk a few streets to drop off your recycling? Would you consider shopping at an open market instead of supporting the big supermarkets with their culture of over-packaging?

BP: What about the renovation of the Rio Bogota?

Pulido: Basically we’re in the process of hydraulically adjusting the water supply to the river. This means that we are re-routing industrial connectors so that they go through water treatment stations rather than directly into the river. We also favour storm water as the natural water supply. The readings show a lot of improvement. There are also some national government and Congressional initiatives regarding the river. So in a few years, we should see a totally different river and an improved landscape alongside it.

BP: What about the sustainability and environmental standards of new residential areas being constructed here in Bogota?

Pulido: Next year we expect to have an eco-urbanism code, which would be a legal standard for the construction of all new residential areas. The problem is with the existing developments like Restrepo that were built without the same level of planning.

The Botanical Garden has a programme to plant trees in those areas but you can imagine how difficult it is to make visible changes there.

BP: What are your hopes for the next year?

Pulido: The most important initiatives are the improvement of air quality through the massive use of air filters, further implementation of hybrid engines in public transport, the full operation of the environmental emergencies programme and the restoration of mountain streams with ecological paths.

Julio Pulido is the ex-Vice-Secretary of Secretaria Distrital del Ambiente, (the district institution in charge of the environment in Bogota)