Veronika Hoelker explains why previous failed transitional zones agreements have made people cautious, as well as what’s different in the latest deal

On June 23, 2016, many Colombians celebrated ‘the end of the war’, following the historic announcement that the negotiating parties in Havana had reached an agreement on a bilateral ceasefire and the abandonment of arms.

Following the news, approval ratings for the negotiations climbed 15 points, reaching an overall 47%, according to Colombia Opina. But even though Colombians are becoming more optimistic about the peace talks, still only 36% of respondents said that they would vote in favour of ratifying the final agreement in a popular referendum.

Former president and fierce critic of the peace talks, Álvaro Uribe, reacted with outrage to the announcements, stating that the word peace had been “wounded”. He is not alone, the population is wary about several aspects of the agreement. An overwhelming majority of Colombians still reject the idea of the FARC participating in politics.

The details of reincorporation procedures into civilian and political life, next on the agenda in Havana, are likely to stir more controversy. Furthermore, the widespread disapproval of the alternative sanctions that were contemplated in the victims’ agreement has not abated. The agreement proposed community service and fines rather than prison sentences for those who participate in the Truth Commission.

Perhaps another reason the agreement has not been able to sway Colombians’ opinions significantly, is that it touches on the extremely delicate issue of what are called ‘concentration’ or transitional zones. These are designated areas in which FARC members will gather to enter the process of disarmament and reincorporation. People are nervous about the impact these zones will have on civilians, and they distrust the FARC’s intentions of actually completely laying down their arms.

In fact, it won’t be the first time that geographical areas have been delineated in Colombia as part of a peace process with irregular armed groups. Unfortunately, these experiences have done little to enhance the reputation of such zones.

Most notably, under President Andrés Pastrana, a 42,000km² military-free zone was established for the purpose of initiating peace dialogues with the FARC. As is well known, those peace talks (1998-2002) were unsuccessful. At that time the guerrilla force, at the peak of its military strength, was actually able to extend its territorial control inside the zone. In addition, the failure of effective preventive measures and lack of an international monitoring mechanism meant that the area became a breeding ground for criminal activity. Procurador Alejandro Ordóñez has referred to these zones as “geographic areas of immunity for members of the insurgency” that jeopardised “the safety of the civilian population”.

The transitional zones established during the peace negotiations with the paramilitaries from 2002 to 2006 saw similar difficulties. In these temporary location zones, there were frequent reports of crimes such as drug-trafficking and money laundering as well as various breaches of the ceasefire, violating the preconditions set by the government to enter peace negotiations with the armed group.

Why the new 23 transitional zones will be different

The most recent partial agreement celebrated between the parties envisions the establishment of 23 ‘Temporary Hamlet Zones for Normalisation’ that will be active for 180 days following the signing of the final peace agreement. The zones will be administered by unarmed international observers from a UN monitoring mission throughout that time span. The UN team will be in charge of verifying the bilateral ceasefire as well as receiving and securing arms and ammunition from the FARC rebels.

Perhaps the biggest difference is that these zones will not be not established until there is a final, comprehensive and definitive accord between the negotiating parties in Havana. Under Pastrana and Uribe, the zones served predominantly preparatory and logistical functions prior to even reaching an agreement.

Crucially, the new transitional zones will likely benefit from a more stable environment, given that most of the critical issues between the warring factions will have already been resolved during the negotiations. And importantly, the agreement will have constitutional status.

In addition, the negotiating parties are well aware of the security risks and past failures that have so scarred the public psyche. They were sure to include strict security protocols in the June 23 deal, which will cover issues such as security of persons, transportation, devices used in the zones and security related to weapons, ammunition and explosives.

A number of mechanisms will be set up to protect the safety of both civilians and ex-combatants entering into civilian life. These aim both to combat neo-paramilitary organisations and to prosecute criminal behaviour that may threaten the implementation of the peace agreements.

Finally, unlike the paramilitary blocks that were more fragmented and demobilised in various stages over three years, the FARC is more unified. Although it is arguably a highly partial estimation, FARC leader Timochenko has affirmed that 99% of FARC combatants will commit to the process, reducing the possibility of dissidents and/or “spoilers” during the process.

On top of everything else, it is reassuring to know that there appears to be little interest in continuing the conflict. There are no real guarantees that things will go smoothly, but as FARC speaker Carlos Lozada recently stated, even “if Colombians vote against the peace accord in the referendum, that doesn’t have to be the end of the process”. He added, “it will not be reason enough for us to return to this painful war”.

Veronika Hoelker holds a Master’s degree in International Relations of the Americas from UCL and currently works at the Bogotá-based NGO the Permanent Committee for the Defense of Human Rights. Veronika assists the judicial advisers at the NGO in matters related to transitional justice and the Colombian peace process in general. 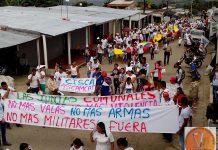