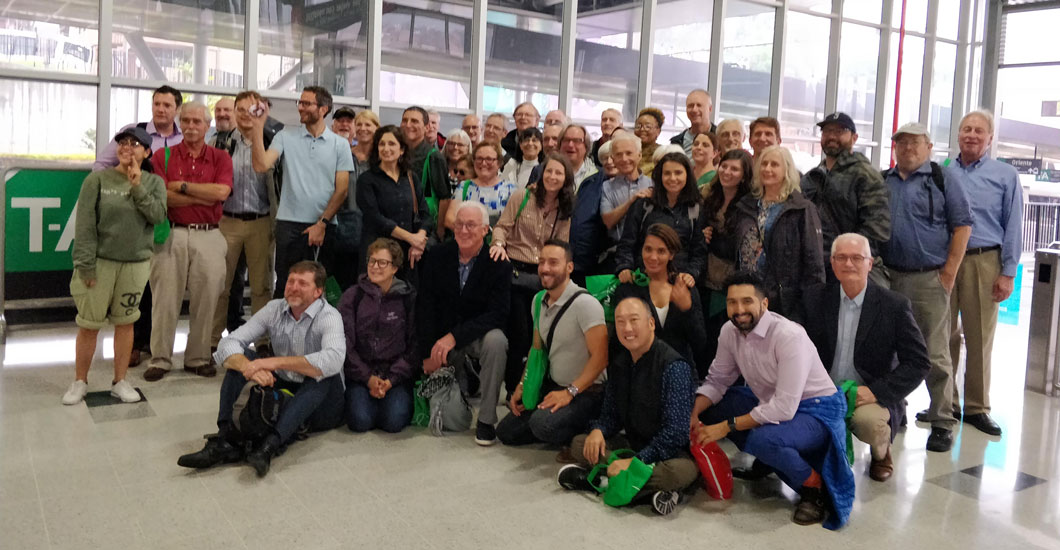 A delegation of public officials and business leaders from Portland, Oregon, USA arrived in Bogotá this month to experience first-hand what’s behind Colombia’s rapid transformation on the world stage.

More than 50 delegates met senior figures in both Bogotá and Medellín to find out more about Colombia’s quick turnaround and so that they could apply new perspectives to the Pacific Northwest.

Randy Miller is a board member of Portland’s economic development organisation, Greater Portland, Inc., and long-time Portland businessman who hosts these events around the US and globe. This year, he wanted to try something different and give Portland leaders a different perspective.

“We have travelled all over the US and the world, and Colombia represents a country that has evolved in one generation from issues of failure to great innovation and success,” said Miller. “We wanted to understand how that’s happened through civic engagement, government leadership, and business and community partnerships, and to learn more from understanding Colombia’s experiences.”

Portland, Oregon – four thousand miles from Colombia – is often hailed as a darling in the eyes of urban planners and sustainability gurus who celebrate its progressive role in redefining what’s possible for new urbanism and the modern US American city.

But Portland also has a lot to learn as the city works through its own growing pains – such as absorbing those fleeing the sky-rocketing cost-of-living realities in San Francisco and other major US cities. With this comes an assortment of civic issues that accompany rapid growth such as homelessness, affordable housing, and public safety.

The scope and scale of what dense, mega-cities like Bogotá and Medellín have accomplished are perfect case studies for what these Portlanders hoped to learn more about.

Maria Ellis – or her Colombian name of Maria Isabel Restrepo Florez – is a Colombian-American born in Medellín but now from Portland, worked with Miller to make the trip happen and is serving as a liaison between Portland and Colombia after spending the past year here.

“There are so many opportunities for collaboration between Colombia and the Pacific Northwest,” said Ellis. “This trip was about more than just learning. It was also an opportunity to grow and cultivate partnerships and collaborate on sustainable development, transportation, urban planning, and innovation that can move us all forward.”

Delegates of the Oregon-Colombia Best Practices Trip spent ten days in the country, and met with Colombian leaders from government, universities, Pro Colombia, and other experts contributing to Colombia’s renaissance through transportation, cultural change, and economic development.

Ellis and Miller would like to thank the Universidad EAN International Relations Department and ACI Medellín for their help and partnership with the programme.

“We hope that this trip was the beginning of a long and productive relationship between Portland and Colombia,” said Ellis. “We look forward to cultivating future opportunities.”