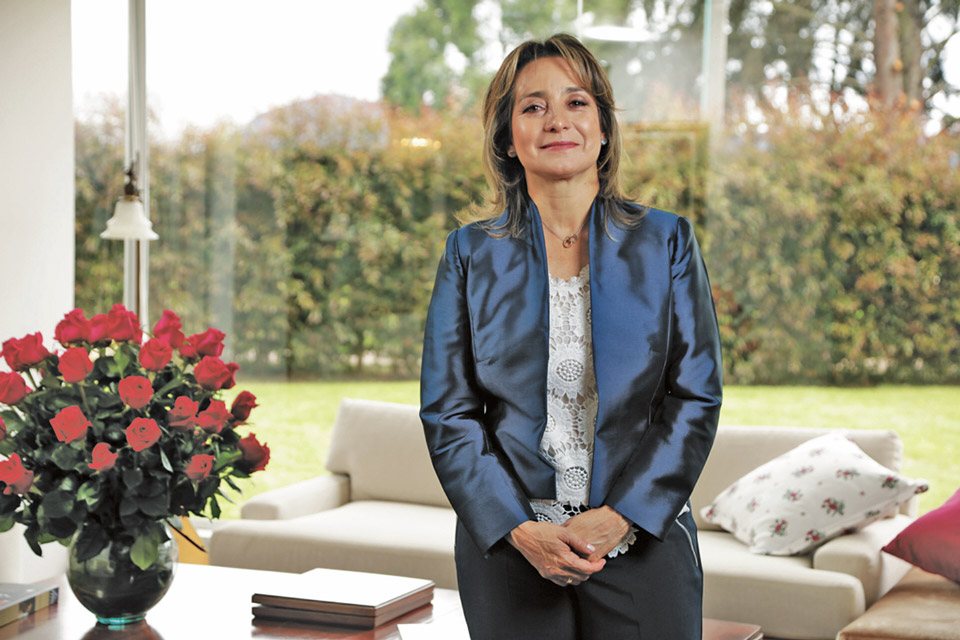 Astrid Álvarez Hernández, CEO of the recently re-branded Grupo Energía Bogotá (GEB) tells us about her vision for the company and ambitious plans for the future.

Astrid Álvarez Hernández took the helm of what was formerly known as Empresa Energía de Bogotá (EEB) at the start of 2017.

Álvarez Hernández is a civil engineer with a management background in both public and private companies and has held senior positions at Ecopetrol and Acueducto de Bogotá. Her career has been closely entwined with the alcaldía and the city’s current mayor, Enrique Peñalosa. She was the campaign manager for his most recent victory, having worked with him on his past five campaigns.

On October 25, GEB – the energy company 76 percent owned by the City of Bogotá – unveiled its new brand and outlined an ambitious growth strategy for the coming years. The CEO says that the recent facelift is just one small part of a wider strategic plan announced in 2016 – renewing the brand to align it with the emerging market trends and challenges and making it one of the “most valuable business groups in the region.”

“The new brand seeks to represent the transformation and permanent expansion of the group, which never stops and is constantly evolving and growing, seeking new opportunities in the region,” she said.

With operations in Colombia, Peru, Guatemala and Brazil, the 121-year-old company serves six million homes and businesses with its services dedicated to the generation, transmission, distribution and marketing of energy, gas and liquid fuels.

The company says it will invest USD$1.3 billion over the remainder of 2017 and into 2018 in order to consolidate its presence in existing territories, as well as potentially expanding into Argentina, Chile or Mexico.

Álvarez Hernández told financial publication Portafolio that the company aims to multiply its revenues tenfold in the coming ten years, setting an ambitious goal of generating COP$35 billion from operations in six countries.

Coming back from the brink

It’s a dramatic turnaround for a company that, 20 years ago, was on the verge of collapse. With massive cost overruns on key projects, most notably the Guavio hydroelectric dam, the EEB was forced to accept an injection of private capital.

The company, along with the administration of the then-mayor Antanas Mockus (well-known for his unorthodox approaches) came up with what was then a radical solution, transforming the EEB into a joint stock company.

The complex restructuring created the separate entities of Codensa and Emgesa, dedicated to distribution and generation, while EEB continued to manage transmission. It allowed the company to not only recover, but also grow.

The public-private partnership is now cited as a success story in business schools. The company recorded a COP$1.356 trillion profit for 2016 and is now a regional leader in oil and gas services.

As Álvarez Hernández puts it, “Today GEB has great capacity to invest, develop new business and, above all, permanently deliver economic and social benefits for its shareholders and the city of Bogotá.”

Renewable energies are a key component of GEB’s strategy for the coming decades. Indeed, with electricity demand in Colombia predicted to rise by 80% in the next 20 years, finding ways to meet this demand through green energy initiatives is not only important for GEB, it’s also important for the county.

The Colombian government launched ‘Misión de Crecimiento Verde’ (Green Growth Mission) in February this year, aiming to become a regional leader in the green economy by 2030.

“For us, the development of renewable energies is fundamental,” says the CEO. “We want to bet on new sources of generation that are environmentally friendly and that contribute to sustainable development.”

According to a 2016 report by law firm Norton Rose Fulbright, Colombia – which currently generates 65% of its energy from hydropower – has great potential for non-conventional energy generation sources. The report says that La Guajira stands out as only one of two regions in Latin America with winds that average close to ten metres per second annually.

Countries all over the world are grappling with the same problem: in the face of dramatically increased demand, how can they ensure the lights stay on? The oft-championed renewables present an appealing solution, but there is no magic formula. Significant hurdles remain – including finding ways to store the electricity, as the peaks in production do not necessarily coincide with the peaks in demand.

Colombia faces additional, idiosyncratic issues such as its difficult geographical terrain and the continued presence of armed groups in rural areas.

Álvarez Hernández adds that for many companies in the energy sector, there are big challenges related to environmental licences and public consultations, which can affect the development of some projects.

She also highlights the potential of complementing the use of renewables with the use of natural gas – pointing out that in Colombia, the group have launched a pilot plan to use natural gas to fuel rubbish trucks, an initiative they have already rolled out successfully in Lima.

“The renewable energy sources will allow the country to grow in a sustainable way, while also protecting the environment,” Álvarez Hernández explained. “However, we believe that natural gas is also an excellent alternative for transportation, homes and industries because they reduce pollution levels by a large amount. In this sense, GEB has been working on various projects to expand the use of vehicular gas in order to reduce CO2 emissions.”

While GEB clearly has its sights set on regional development, its DNA will always be rooted in Bogotá. Historically, its fortunes have developed in parallel with those of the city. As the company reaches yet another milestone in its history, let us hope that the capital is able to keep up with groundbreaking green strategies.