‘There’s a transition that people don’t understand’: Emotions, myths and misinformation are the new battleground in Colombia’s conflict, as Sam Ling Gibson explains.

History has been made as Colombia finally ends the world’s longest conflict – a superlative which no country would desire. The new agreement reached after more than four years of negotiations in Havana between the left-wing insurgent group (the FARC) and the Colombian government, has been given a resounding congressional approval with 75 votes to 0.

Although the peace deal, that had been significantly modified after a narrow rejection by the Colombian public in October, received overwhelming legislative approval, the motion was boycotted by the Centro Democrático party, the political party of ex-president Álvaro Uribe, who led the ‘No’ campaign.

The decision to bypass another public vote is understandable from the perspective of the president – as another rejection would almost certainly scupper any possibility of a negotiated end to the decades-old-conflict. However, it also highlights the great divisions which exist towards the conditions necessary for peace.

When we scratch below the surface we can see that much of this electorate are unwilling to accept FARC ex-combatants socially, politically, or economically. This week’s acceptance of the deal sits uncomfortably alongside a recent El Tiempo national survey that found that 82% of respondents continue to view the group’s members as “plain delinquents”, with only 19% having trust in them.

Much of this appears to hinge on a misguided narrative that FARC combatants have a proclivity towards violence, and that demobilised members will bring criminal traits directly into the communities that receive them. Not only do these swathes of the country oppose any theoretical reintegration, they also have the capacity to hinder reintegration on individual and community levels. Separate studies from Polimetrica and Encuesta Nacional Paz y Reconciliación (NPR) both recently found that over 60% of those surveyed were against ex-combatants having any political participation, and between 30-40% were not prepared to give a job to, knowingly work or live alongside former fighters.

Related – Why we hate the FARC (and not so the paramilitaries)

Luisa, a nurse in Bogotá who demobilised from the FARC six years ago, understands why the public might fear returning fighters. She says, “If everything that you hear is true, then it’s logical that they’re afraid of us.” Like many ex-combatants I’ve talked to, she also disputes people’s assumptions. “There’s a separation and transition that people don’t understand […] they believe that demobilised people are all very bad or murderers, just because we were there in the conflict.”

This belief is not baseless: having ex-combatants in the neighbourhood does increase insecurity, but rather than being the perpetrators, it is the ex-combatants who are the principal victims. This is often due to retaliation from paramilitary and BACRIM (criminal gangs) because of their former ties with the FARC, or because they refuse pressure from recruiting gangs to enter a life of organised crime.

As Viviana, who has been out of the conflict for four years, recalled, “I don’t know how they found out [the public], but when did, they made fun of me and my daughter. I was scared that people knew the truth, and I panicked more because may be the paramilitaries would find out.” This resonates with findings from national studies. Juan Prieto, a researcher on conflict attitudes, found in 2012 that 76% of returnees had received threats in their neighbourhood (compared to 11% of ordinary community members), and the ACR (the agency that oversees reintegration) calculated in 2008 that around 5% of demobilised ex-combatants end up murdered.

Estimates of ex-combatant re-offending rates vary. The ACR puts the figure at 8.3%, while the Fundación Ideas para la Paz (FIP) says 24%. It is important to note that these figures include ex-paramilitaries and that, according to Enzo Nussio & Oliver Kaplan’s 2016 study on reintegration, ex-guerrillas are 50% less likely to return to crime than these other illegal armed groups.

So, the FARC recidivism figure is probably less than 12%, even by the most conservative measures. Therefore the view that demobilised FARC members will be criminals is largely unfounded, yet it continues to hinder reintegration. Indeed, reintegration is often thwarted, not by the assumed shortfalls of the demobilising fighters, but largely by stigmatisation from much of Colombian society based on the dominant discourses surrounding them.

Moreover, the FIP study concludes that the chances of recidivism are not innate; they actually increase when those demobilising are rejected by the community. Daniel, who demobilised ten years ago recounted, “I left the conflict, got my degree and with it got a job, only to be fired when they found out I’d been part of an armed group. How do we integrate into society? Where does this label change? Society has to have to accept us as citizens, but we can’t be citizens if we’re not accepted.”

This view – that reintegration is a two-way street and cannot be done by ex-combatants alone – is theoretically shared by civil society too; the NPR found that 63.5% of those surveyed stated that they have a personal responsibility to play a role in the reconciliation process. But, this does not necessarily translate into positive actions when accepting ex-combatants back into their communities, largely due to the fact that much of civil society fears, stigmatises and even resents ex-combatants.

The way that these narratives divide the country into two neat categories, one good, and one bad, is an unfortunate yet inevitable by-product of any civil war. However, now that the civil war is over, these flawed assumptions need to shift, otherwise they will continue to keep the country divided and hinder the reintegration of those coming back in from the cold.

As Sebastian, who demobilised only months ago puts it, “When Colombians accept people as they are and aren’t be carried away by what they were, we can begin the journey towards forgiveness and reconciliation.”

Allowing space for the counter-narratives of those from all sides of the conflict – drowned out until now in the dehumanising discourse of war – allows us to begin to see the human nature of individuals who many have viewed as enemies for such a long time.

Luisa questions, “Why do they only ask about how many people I’ve killed? Why not recognise [ex-combatants] as people who left the armed conflict […] and ask how we survived and why we started fighting in the first place, and how we can work with civilians again?”

Given the chance, returnees want to participate and contribute to a post-conflict Colombia and contest the misguided and exaggerated stereotypes that have kept them in the shadows for so long.

For now, the conflict with the FARC may be over, but the war rages on. It has simply moved from the jungle and AK-47s to the memory and the ‘collective imagination’ of Colombia.

Sam Ling Gibson lectures on conflict resolution and diplomacy in Bogotá. He has been involved in various research projects addressing the challenges of a post-conflict Colombia. 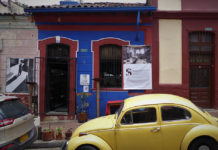