‘Got, got, need, got, need…’ We examine the passion for sticker collecting in Colombia

With less than 50 days to go until the start of the World Cup in Brazil, football fever rises a few degrees with every sunrise, even in Bogota’s not-so-hot weather.

When Panini sticker frenzy struck the city on March 29, it stoked the flames still further.

The ‘monita’, ‘lamina’ or ‘caramelo’ cards are being snapped up from shops and street vendors all over Colombia.

It’s certainly a strange sight to be walking around Bogotá at lunchtime and see grown adults in suits – both men and women – clustered around stands frantically trying to get rid of their swaps and slowly emptying their lists of missing Messis, Ronaldos and Falcaos.

In many footballing countries, this kind of collection craziness is usually only seen in children and adolescents, and there is a slight stigma attached to adults collecting stickers. That stigma simply does not exist in Colombia.

There is no clear reason why so many people have been swept up by this phenomenon. One enthusiast told us simply: “I have been waiting for it to come since I finished my last World Cup album.”  Another said: “All my colleagues at the office do it, so I couldn’t stay behind.”

Andres Lara, a Bogotá IT worker, tells The Bogotá Post that his first ever album was from the France 1998 World Cup: “I was 14 and I needed to have the stickers from the Colombian squad. It gave me such a satisfaction that I decided to get the album.”

He has been hooked on collecting ever since, filling World Cup albums from 2002, 2006 and 2010. The fact that Colombia did not compete in any of these Cups did little to quell his passion, but this World Cup is even more exciting.

“Now that Colombia is in, it is even more a must have in my collection.”

When asked if he would ever stop collecting, his answering smile said it all: “Not before I die!”

Panini passion has struck other South American countries too – as is evident from the footage of squares filled with hundreds of people, all trying to find their missing stickers.

Joel Campbell from the Costa Rican squad caused a stir and some laughs when he posted on twitter: 100 packets and I did not find myself. Judging by his accompanying picture, not only is Panini addictive, it can be pretty messy.

At least the young Arsenal striker, now playing on loan in Greece, immediately got a response from Panini UK and Ireland reassuring him that he does appear in the packets and offering to send one to his home address.

Colombian Panini fans, on the other hand, will have to keep visiting the many swapping sites in the city if they want to complete their album.

Faces Of A Scarred Society? 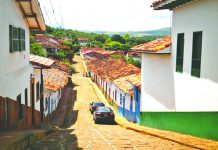 Top Five Things To Do In Santander