Home Colombia Peace accord to be signed by March

President Juan Manuel Santos arrived in Havana today to sign a historic agreement with the FARC.

The agreement on transitional justice marks the end of a 16-month impasse in the talks, and opens the door for the signing of a full peace accord by March 23, 2016.

“The chief secretariat of the FARC and I have agreed that the negotiations should be finished in no less than 6 months,” said Santos.

The talks, which aim to end almost 60 years of violence, began in November 2012 and had seen agreements reached on three out of the five points on the agenda.

Today’s accord was read aloud by delegates from Cuba and Norway, before being signed by President Santos and the FARC leader, Timoleón Jimenéz (alias Timochenko).

Related – Political participation for the FARC – the epitome of ‘low risk, high reward’

It commits to the creation of a ‘Special Jurisdiction for Peace’ that has the power to seek the truth through tribunals, and also pass judgement through special courts. It is conditional on the FARC disarming within 60 days of the signing of an agreement, and also states that the government will give its full support to transforming FARC into a legal political movement post conflict.

Addressing the meeting, Santos explained that he believes that the agreement reaches the objective set from the outset: peace without impunity.

He said: “This issue is perhaps the most difficult and the most complicated to define. So it has been in all the peace processes around the world.”

The president stressed that the special tribunal follows the Colombian constitution as well as satisfying the victim’s right to justice, truth, reparation and non-repetition.

The special jurisdiction, which is applicable to everybody involved in the conflict, allows for amnesty in some cases, as well as reduced penalties for those who admit their responsibilities and participate in the process of reparation to victims in the cases of serious crimes.

Those who recognise their crimes will receive sentences of five to eight years of ‘restricted freedom.’ Those who do not will face custodial sentences of up to 20 years.

Timochenko commented, “The special jurisdiction that we have created should inspire us all to look forward, to agree on the future of our country and to stop confronting the past.”

He added, “Today we announce to the country that we will do everything in our power to reach a final peace agreement in a few months.”

Senator Álvero Uribe was quick to take to twitter with his ‘concerns’, primarily the lack of custodial sentences for those who admit their crimes. “It is acceptable that the guerrilla fighters are not put in prison, but to grant this indulgence to the ringleader who is responsible for atrocities is a bad example that promotes new violence,” he said.

He also objected to the armed forces being judged by the same mechanisms of justice as the rebel fighters, and believes that narco trafficking and kidnapping should not be considered political crimes.

Santos said, “As I have always said to the men and women of our armed forces, there is no possibility to give special treatment to the FARC if there is not – at the same time – a treatment which can be different, but simultaneous, equal and symmetrical for our military and police.”

He finished by reiterating that it will be the Colombians who will have the final say as they will vote on the contents of the agreement, and by stressing that, “Peace is possible, and it is closer than ever!”

The road to peace – timeline of events 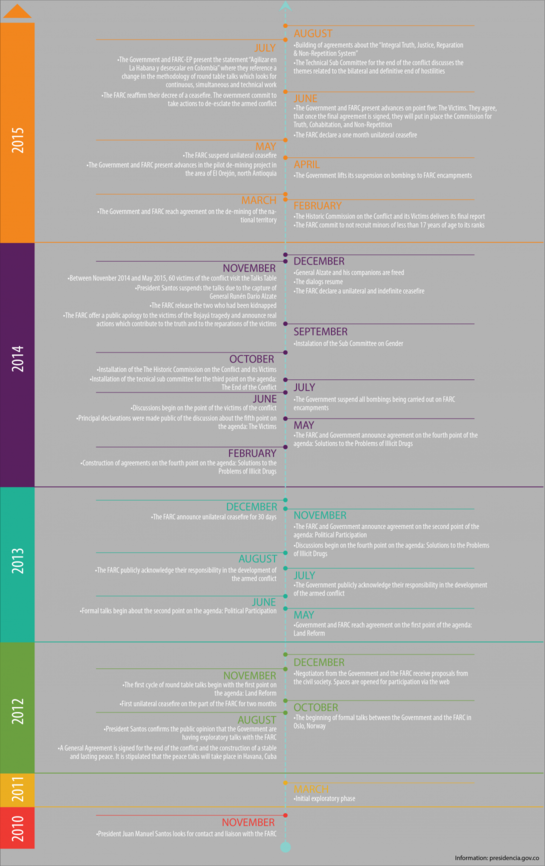 Want to know more? The ten point outline of today’s agreement is outlined here and read about how a peace agreement might change the business landscape in Colombia.