Home Language Perfecting the past

Grappling with preterite vs imperfect tenses? Katie Jacoby guides you through the specifics of the past tense.

Preterite vs. imperfect is a grammar point that’s always sticky for Spanish learners. So much depends on perspective, and textbooks frustratingly tend to present rules as absolute. Indeed, you could refer to the same incident in one moment with the preterite and in another with the imperfect without contradicting yourself. So, don’t feel bad about the past tense–You’re not crazy! Let’s look at a few specific uses.

One use of the imperfect is for providing background information -the backdrop or scenery- for actions expressed by the preterite. So, our action may be that a girl looked out the window (miró desde la ventana), but we can frame and contextualize that action by commenting that it was a dark night (era una noche oscura), it was 11 p.m. (eran las once), the girl was 22 (tenía 22 años), there was a cat sleeping on the floor (había un gato durmiendo en el piso), etc. As the narrator or observer I could choose to narrate or process these facts in such a way that they would be conveyed with the preterite (going back to the moment of the actions that created these situations): a cat fell asleep on the floor (se durmió), the sky grew dark (se hizo oscuro/se oscureció), the girl turned 22 (cumplió 22 años), the clock struck 11 (el reloj dio las 11). But at the particular moment I’m choosing to narrate, those actions are in the past: I see only the ongoing situations that resulted from them.

If anything, foreigners tend to overuse the imperfect and underuse the preterite. Standard explanations are oversimplifications and can make you think, for example, that anything related to a mental process requires the imperfect. Not so. One example is whether you liked something in the past. Oh, you lived in Buenos Aires for 20 years? Did you like it? (“It” equaling living there) Here, you need to ask, ¿Te gustó? Did the people at the party like the brownies you made? ¿Les gustaron los brownies? The duration of your forming and holding an opinion about something corresponds to the time that it lasted, thus having a beginning and ending that require the preterite. It’s not ongoing: it’s not valid to dislike living in BA for those 20 years after the fact, nor to decide to like the already eaten brownies a week later. (You may realize you liked or disliked them, but the liking itself had a clear start and finish).

It’s the same thing with other thoughts or opinions that are reactions. ¿Qué te pareció el artículo? What did you think about the article (after reading it)? It’s understood that you read it and then performed the action of forming an opinion.

Along the same lines, use the preterite to give your opinion of something afterward. La fiesta estuvo chévere, el libro estuvo aburrido. This is your overall opinion of the completed experience (your experience attending the party, your experience reading the book). If you express this with the imperfect, you’re sharing your opinion at some given point (one hour in, at chapter five) as background information before some action or change. La fiesta era un poco aburrida pero se puso divertida cuando llegó Natalia. 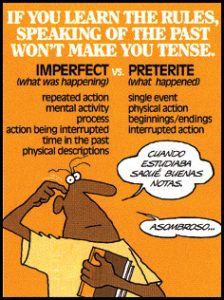 I could go over the classic rules for preterite v. imperfect (personally, I learned the imperfect with the mnemonic HOT SWAMP, and then had to unlearn and relearn everything once I started living in Spanish), but I find it more useful to think of these rules as guidelines or rules of thumb. You truly have to pause and listen to what people are saying to understand why their mind automatically reaches for one tense and not another at any given moment.  Also, learning a language is about more than just rules. We non-natives aren’t used to tenses that are so nuanced that they can represent a different sense of time or different degrees of certainty, but that’s one of the beautiful things about Spanish. Practice and lots of attentive listening will help you gain confidence about this grammar point slowly but surely!