Home In This Edition Mas Aguacate, Menos Petroleo: A day at a Petro political rally

There was an electric feeling surrounding Medellin’s Parque Explora on Wednesday evening, as the backdrop to the University of Antioquia campus became the political rallying ground for Gustavo Petro’s campaign. Colombia’s election day is now just nine days away and will see the country take to the polls to select one of five running candidates to take the Presidential seat. With so little time left, candidates from all corners have upped the ante with campaigning as they rally to secure the pivotal votes from undecided Colombians across the country. 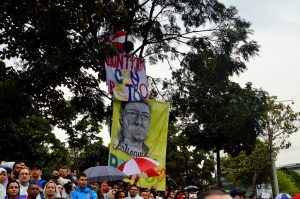 Associated with a progressive leftism within the political sphere, 58-year-old Gustavo Petro’s ideologies appeal to change and democratic reform. His policies speak to lower-class Colombians through his stance on workers rights, tax reform and free healthcare and one of his largest campaign messages address the environment and a future of agricultural prosperity for the country. In essence, the way this prospective President is identified and the vehemently populous strand which has placed him in this position relays a somewhat Corbyn-esque feel which was strongly demonstrated throughout the night.

In order to enter the free event, male and female visitors were separated into two lines as entrants underwent a security check and a severe pat-down. A staggering amount of attendees were of university age and they waited patiently amidst homemade banners, Colombian flags, Communist flags and Patriotic Union flags, amongst others, to gain access. The mood was one of excitement in the air amidst high-spirited supporters, although one wonders what traits would warrant security to turn you away. Once inside, a large platform adorned with spotlights held the centre stage as the group began to gather and await the political rally to come, at which time supporters proudly paraded large placards in Petro’s support whilst chanting his name. Along the sidelines, there was also a strong security presence as armed officers and security officials on horseback oversaw the event. 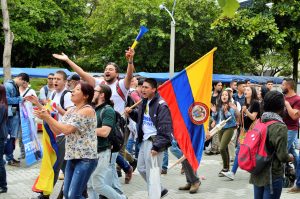 The crowd’s excitement continued to grow as the stage was then filled with a number of supporters who addressed a crowd that was already tightly compacted into the arena. Of the local support who took to the stage, a young girl reading a poem about Petro and politics appeared to steal the hearts of the audience. Sometimes stumbling over her words, the young supporter spoke of the promise that this presidential candidate could provide for her future and that of women and children. As the sky began to turn a darkened colour and a downpour consumed the umbrella clad crowd, a rap group then voiced their support through songs and enticed already high morales of the guests. The element of appeal here once again spoke to youthful ideals and a ‘down with the kids’ type of ambience. 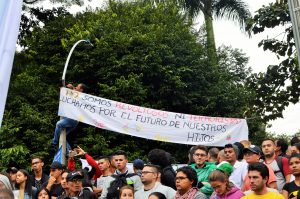 In the run-up to the eagerly anticipated appearance of Petro, the stage then played host to a number of other prominent faces who rallied their support for the presidential candidate. Of the first was well known Afro-Colombian leader and activist, Francia Elena Márquez who expressed her excitement at the prospect of Angela Maria Robledo becoming the first female Vice President of the country. To the chants of ‘mas educación, menos policía,’ Colombian author, screenwriter and journalist Gustavo Bolivar also relayed his support for the Petro movement. Handing the microphone to Colombian actor, Gregorio Pernia, his impassioned words left him almost speechless and incredibly tearful to which someone behind me jokingly gave credit to his excellent acting skills at that moment.

The crowd had been waiting for over two and a half hours through rainstorms and rap battles before the contender made it to the stage himself. Holding a small bunch of flowers around the microphone, dressed in a poncho and stood next to a large bodyguard holding a protective shield, the size of the audience seemed to grow for over two hours as he delivered his political statement. As the politician addressed his key campaign promises, the crowd erupted with the words, ‘mas aguacate, menos petroleo‘ and environmental issues, as well as appeals directly to the female vote, remained central topics. 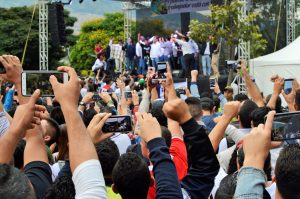 The most prevalent messages that Petro delivered touched upon Antioquia’s history; the time of Escobar; the true benefits of change for places such as Comuna 13; conflicts with Mexican cartels; and issues with the United States whilst also urging for a future of co-existence and why peace should be now. Already deep into the evening, it was near the end of the rally that the crowd were encouraged shine the light from their mobile phones, in a vigil-esque motion that was relatively unusual for political events of this nature but one that signaled solidarity nonetheless. 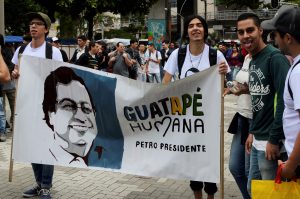 With an age bracket that must have averaged under thirty years of age, the attendees had flocked from all parts of Antioquia for the evening’s event, with signs stating locations as far as Guatape. Communist and UP flags flew alongside one another and highlighted the leftist sentiments of Petro’s supporters, which is somewhat expected from the political melting pots of university campuses. The event was peaceful, entertaining and had a united feel amongst a crowd eager for a positive change for Colombia.

As a speaker, Petro delivered a clear image of his beliefs however, there still remain critics of this candidate and a broader element of distrust for the former M-19 guerrilla. It remains to be seen how effective the rally was in gathering votes when he spent the night preaching to the converted. 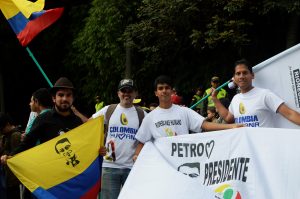