Home Colombia One year in post-conflict Colombia: Pieces of peace

One year since the signing of the peace agreement with the FARC, and – as was to be expected – there have been a number of ups and downs in post-conflict Colombia. But while there are plenty of challenges, there are also a lot of people throughout the country working to address them.

November 24, 2016, saw the understated signing of the revised peace accord between the Colombian government and the FARC. This first year of post-conflict has seen its fair share of challenges – most recently the amendments to the Special Jurisdiction for Peace (JEP) which some insiders dubbed ‘the worst crisis in peace process yet.’

While there are clearly major hurdles, not least the upcoming 2018 elections, it’s not all doom and gloom. A recent report from Notre Dame’s Kroc Institute, one of the world’s leading centres for the study of conflict causes and peace strategies, said that some challenges remained although, “The pace of implementation is on par or slightly superior to other peace agreements, and if current obstacles are overcome, this process is on a path toward success.”

Since it is often the setbacks that make the headlines, in this edition, we also highlight just a few of the many people, organisations and projects that are quietly contributing towards making a lasting peace a reality.

The Special Jurisdiction for Peace is proving to be a real stumbling block, with several modifications that are not in keeping with the original agreement.

Most recently, on November 14, the constitutional court did declare the Special Jurisdiction for Peace constitutional, albeit with some changes. The court stressed that political participation of demobilised FARC rebels must be conditional on their effective participation in the peace jurisdiction. Furthermore, the ruling exempts civilian third parties and state officials (such as governors) from having to appear before the transitional justice court.

In addition, at the time of writing, the statutory law that creates the Special Jurisdiction for Peace continues to be debated in congress. The new FARC party and civil society organisations have denounced recent changes introduced to the bill by the senate, whereby human rights defenders would be barred from serving as judges in the peace tribunal. If these modifications are upheld, they may result in the dismissal of several judges that have already been appointed to the court by an independent selection committee.

One positive ruling came in October, when the Colombian constitutional court backed a decree that shields the peace agreement from being amended for the next 12 years. With upcoming presidential elections in 2018, peace supporters had feared that future presidents may drastically modify or even overturn the peace agreement altogether.

For all the talk of a peace dividend, it’s widely accepted that it will be up to five or even ten years before the country really feels the economic benefits of peace, including increased foreign investment, increased tourism and increased spending. And in the meantime, the fact is that peace costs money which, especially after the fall in the global oil prices, is in short supply.

Rural development, land reform and compensation for the victims are just some of the crucial – and costly – elements of peacebuilding. A July estimate in Las2Orillas puts the cost of the agricultural reforms at USD$10 billion annually and compensation to victims at USD$40 billion.

The European Union pledged EUR€600 million towards a peace fund, and the United States have stuck with their USD$450 million Peace Colombia Package.

The Camára de Comercio is very serious about ensuring businesses and entrepreneurs play a role in peacebuilding actions. As part of their peacebuilding strategy they run workshops, organise talks and have introduced practical measures such as EmPaz – a free tool for businesses to measure their contribution to peace.

The October protest violence in Tumaco was a reminder of the ongoing turbulence in the troubled region, which has the highest amount of coca production in the country. It highlighted both the issues surrounding forced coca eradication and the increased presence of armed groups and paramilitary activities as rival gangs compete to fill the vacuum left by the FARC. CINEP, a peace NGO, identified the presence of Clan Úsuga, Clan del Golfo, Clan Pacífico, La Empresa, Gaitanistas, Gente del Orden, Cártel de Sinaloa and Guerrillas Unidas del Pacífico in the region this year.

A number of national and international NGOs have expressed serious concern about the killings of social activists and community leaders. On November 17 the UNHCR expressed growing concern about the increase in murders and threats. According to their figures, there have been 78 deaths this year and 13 suspected murders. In addition, at least 1,500 people have been displaced by threats and violence in 2017, although the report says the number may be higher because people are afraid to report abuses.

A landmark constitutional reform to prohibit neo-paramilitarism has been approved by congress, and recent military strikes targeting these groups have been successful in capturing some of their most influential leaders. Although steps to indict those responsible for killing social leaders have been made (54 indictments so far, according to President Santos), more long-term measures are needed. To that end, the government has established a national commission for security guarantees, but it has been slow to respond to the increasing dangers in affected regions.

These crucial building blocks of the construction of a lasting peace are difficult to measure – and in truth, it will be lifetimes before they are fully realised. The high level of distrust towards the FARC is illustrated by Semana’s recent survey which showed 85% of people have an unfavourable image of the former guerrilla group.

Worryingly, the Kroc Institute report says that, “No activity has been observed in more than 80% of the provisions related to democratic participation and social participation guarantees, which weakens public support and commitment.” It does however say that 73% of the provisions related to the reincorporation of FARC-EP into civilian life (economically, socially and politically) have been partially or completely implemented.

Despite some setbacks, the implementation of the peace agreement has proven effective in preventing casualties related to the armed conflict. Recent findings by the Conflict analysis resource center (CERAC) indicate that deaths have dropped from almost 3000 in the year 2002 to zero this year, and armed confrontations between the FARC and the security forces have ceased completely. These developments have consolidated the peace process, as CERAC estimates that conflict-related deaths and humanitarian crises are unlikely to resurface in the future.

It is impossible to highlight all the work being done in this area, especially as this isn’t a question of quick fixes and grand gestures. Community building involves thousands of projects – activities that get people talking, reduce prejudice against marginalised groups, build confidence, help former combatants begin new lives or help communities reclaim land marks associated with violence.

One such example is recent workshop organised by the Programa de Alianzas para la Reconciliación (PAR) along with the Fundación Instituto de la Conversación. They brought members of the religious community together with representatives of sexual diversity advocacy organisations. Following something called the Café del Mundo methodology, they provided a structured environment in which the groups collectively answered polarising questions, which allowed participants to identify similarities in their thinking. Marcela Sánchez, who took part said, “It allows us to see that we’re all human and that we have, paradoxically, a lot in common.” The PAR is a joint initiative between the United States Agency for International Development (USAID) and ACDI/VOCA.

This article originally appeared in Edition 49 of The Bogotá Post.

What is the government’s current commitment to protecting social leaders in Colombia? 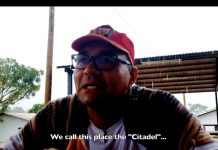 Interview with ex-FARC commander: ‘No instruction manuals for peace’